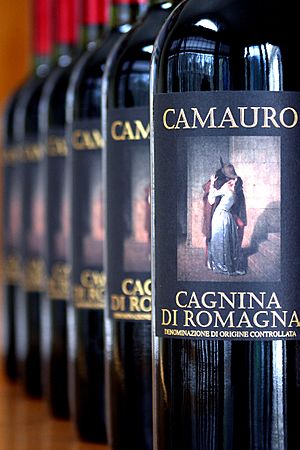 Italian wine from the wine region in Emilia-Romagna

Italy is home to some of the oldest wine-producing regions in the world, and Italian wines are known worldwide for their broad variety. Italy, closely followed by Spain and France, is the world’s largest wine producer by volume. Its contribution is about 45–50 million hl per year, and represents about ⅓ of global production. Italian wine is exported around the world and is also extremely popular in Italy: Italians rank fifth on the world wine consumption list by volume with 42 litres per capita consumption. Grapes are grown in almost every region of the country and there are more than one million vineyards under cultivation.

Etruscans and Greek settlers produced wine in Italy before the Romans started their own vineyards in the 2nd century BC. Roman grape-growing and winemaking was prolific and well-organized, pioneering large-scale production and storage techniques like barrel-making and bottling. 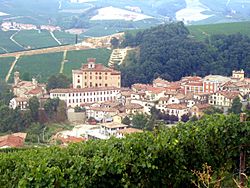 Vineyards around the town of Barolo 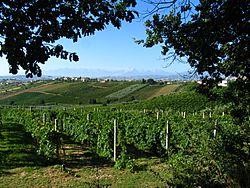 A typical Italian vineyard scene, with vines growing together with olive trees

Although vines had been cultivated from the wild Vitis vinifera grape for millennia, it wasn't until the Greek colonization that wine-making flourished. Viticulture was introduced into Sicily and southern Italy by the Mycenaean Greeks, and was well established when the extensive Greek colonization transpired around 800 BC.

It was during the Roman defeat of the Carthaginians (acknowledged masters of wine-making) in the 2nd century BC that Italian wine production began to further flourish. Large-scale, slave-run plantations sprang up in many coastal areas and spread to such an extent that, in AD 92, emperor Domitian was forced to destroy a great number of vineyards in order to free up fertile land for food production.

In 2005, Italy was second globally, producing about 20% of the global production of wine compared to France, which produced 22%.

In 2005, Italy's share in dollar value of table wine imports into the U.S. was 32%, Australia's was 24%, and France's was 20%. Italian and Australian share has rapidly increased in recent years. 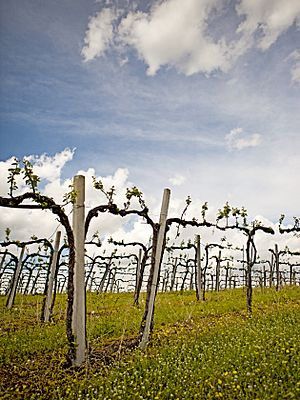 Grapes are grown in almost every part of Italy, with more than 1 million vineyards under cultivation. Each region is proud of its carefully tended, neatly pruned vines.

Italian wines tend to be acidic, dry, light-to-medium bodied, with lots of flavour and smell. Because of these characteristics, Italian wines are, in general, better drunk with food than they are beverages to be enjoyed on their own.

In some places the vines are trained along low supports. In others they climb as slender saplings. The people of each region are also proud of the wine they make from their own grapes.

Most winemaking in Italy is done in modern wineries. But villagers, making wine for their own use, sometimes tread the grapes with their bare feet until the juice is squeezed out. They believe this ancient method still makes the best wine.

All content from Kiddle encyclopedia articles (including the article images and facts) can be freely used under Attribution-ShareAlike license, unless stated otherwise. Cite this article:
Italian wine Facts for Kids. Kiddle Encyclopedia.