Marcel Mangel (22 March 1923 – 22 September 2007) better known by his stage name Marcel Marceau, was a French mime. He was one of the most popular mimes in the world. He was said to be "single-handedly responsible for reviving the art of mime after World War II."

As a youth, he lived in hiding and worked with the French Resistance during most of World War II, giving his first major performance to 3000 troops after the liberation of Paris in August 1944. Following the war, he studied dramatic art and mime in Paris.

In 1959 he established his own pantomime school in Paris, and subsequently set up the Marceau Foundation to promote the art in the U.S. Among his various awards and honours he was made "Grand Officier de la Légion d'Honneur" (1998) and was awarded the National Order of Merit (1998) in France. He won the Emmy Award for his work on television, was elected member of the Academy of Fine Arts in Berlin, and was declared a "National treasure" in Japan. He was friends with Michael Jackson for nearly 20 years, and Jackson said he would use some of Marceau's techniques in his own dance steps.

Marceau created many personalities. The most famous of these is probably Bip the clown. He received several awards for his works. 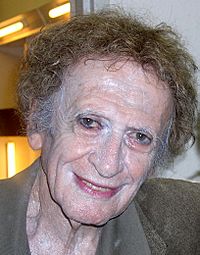 All content from Kiddle encyclopedia articles (including the article images and facts) can be freely used under Attribution-ShareAlike license, unless stated otherwise. Cite this article:
Marcel Marceau Facts for Kids. Kiddle Encyclopedia.