Dordogne (Occitan: Dordonha) is a department in the southwest of France. It is named after the Dordogne river that runs through the department.

The department is in the region of Nouvelle-Aquitaine. It is between the valley of the Loire river and the Pyrenees. Its prefecture (capital) is Périgueux.

Dordogne was formed during the French Revolution on 4 March 1790 with parts of the old province of Périgord. It was divided into nine districts: Belvès, Bergerac, Excideuil, Montignac, Montpon, Nontron, Périgueux, Ribérac and Sarlat.

Bergerac, Périgueux and Sarlat-la-Canéda were alternatively the capital of the department but later it was decided that only Périgueux would be the capital.

Dordogne is part of the Nouvelle-Aquitaine region. It is the third largest department of Metropolitan France, after Gironde and Landes. It has an area of 9,060 km2 (3,498 sq mi).

The department is bordered by seven departments in two regions:

Dordogne is part of the region of Nouvelle-Aquitaine. It is managed by the Departamental Council of Dordogne in Périgueux.

There are 4 arrondissements (districts), 25 cantons and 520 communes (municipalities) in Dordogne.

The following is a list of the 25 cantons of the Dordogne department (with their INSEE codes), following the French canton reorganisation which came into effect in March 2015:

The inhabitants of Dordogne are known, in French, as Dordognais (women: Dordognaises). They are also known as Périgordins or Périgoudins.

Evolution of the population in Dordogne 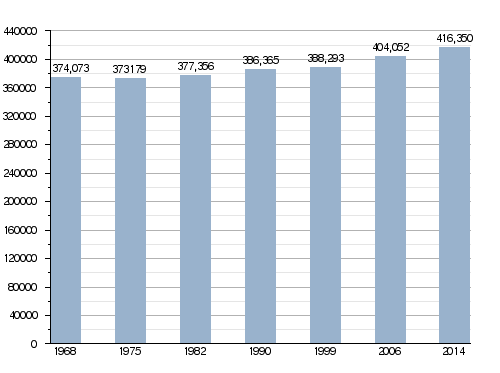 The cities in the department with more of 5,000 inhabitants are:

All content from Kiddle encyclopedia articles (including the article images and facts) can be freely used under Attribution-ShareAlike license, unless stated otherwise. Cite this article:
Dordogne Facts for Kids. Kiddle Encyclopedia.