Charente-Maritime (Saintongeais: Chérente-Marine) is a department on the west coast of France in the Nouvelle-Aquitaine region. It is named after the Charente river, the most important river in the department, and its position along the coast.

Its prefecture is the city of La Rochelle. 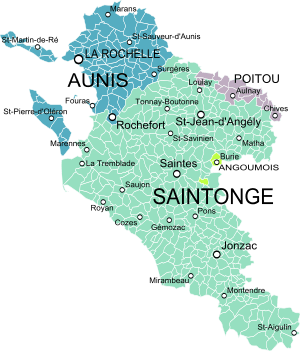 Charente-Maritime and the old provinces of Saintonge, Poitou and Aunis.

The department, as Charente-Inférieure ("Lower Charente" because it was in the lower part of the Charente river), is one of the 83 French departments made during the French revolution, on 4 March 1790.

It was created from parts of the old provinces of Saintonge and Aunis and small parts of Poitou and Angoumois.

In 1800, with the creation of the arrondissements in France, the seven districts were changed into six arrondissements: Saintes, Jonzac, Marennes, Rochefort, La Rochelle and Saint-Jean-d'Angély and in 1810 the capital was moved to La Rochelle.

On 4 Septembre 1941, the name of the department was changed from Charente-Inférieure to the present name of Charente-Maritime.

The highest point in the department is in the woods of Chantemerlière, near the commune of Contré in the northeast, and that is 173 m (568 ft) high.

The department is bordered by the departments: Vendée, Deux-Sèvres, Charente, Dordogne and Gironde.

The main rivers are the Charente and its tributaries, the Boutonne and the Seugne, along with the Sèvre Niortaise, the Seudre, and the Garonne in its downstream part, which is the estuary of the Gironde.

The department includes the islands of:

The climate of La Rochelle is an oceanic climate with template summers, Cfb (Marine West Coast Climate) in the Köppen climate classification.

There are 5 arrondissements (districts), 27 cantons and 469 communes (municipalities) in Charente-Maritime.

The following is a list of the 27 cantons of the Charente-Maritime department (with their INSEE codes), following the French canton reorganisation which came into effect in March 2015:

The inhabitants of Charente-Maritime are known, in French, as Charentais maritimes (women: Charentaises maritimes).

Evolution of the population in Charente-Maritime 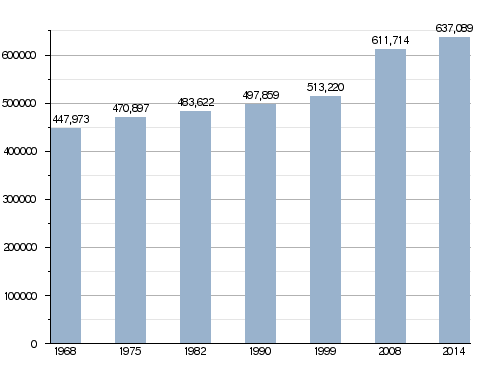 All content from Kiddle encyclopedia articles (including the article images and facts) can be freely used under Attribution-ShareAlike license, unless stated otherwise. Cite this article:
Charente-Maritime Facts for Kids. Kiddle Encyclopedia.