Île d'Oléron (pronounced: [il doleʁɔ̃]) is an island and canton in the Atlantic coast of France (to the west of Rochefort). It is the second largest island of Metropolitan France, after Corsica. The capital, and largest town, is Saint-Pierre-d'Oléron; it is in the centre of the island.

Since 1966, there is a bridge that connects the island with mainland. 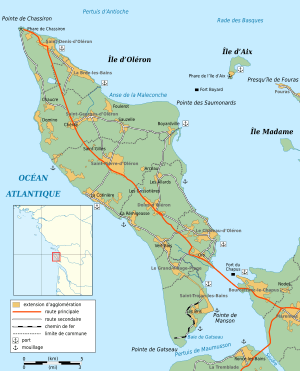 The Île d'Oléron is on the southern side of the Pertuis d'Antioche strait.

The climate in Saint-Denis-d'Oléron is an oceanic climate with template summers, Cfb (Marine West Coast Climate) in the Köppen climate classification. 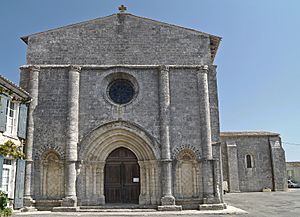 Administratively, the island belongs to the Charente-Maritime department, arrondissement of Rochefort, in the Nouvelle-Aquitaine region.

The island was divided in two cantons: Canton du Château-d'Oléron and Canton de Saint-Pierre-d'Oléron, with 4 communes each. In 27 February 2014, the number of cantons was reduced and the two cantons of the island were combined to form only one: the Canton de l'Île d'Oléron, divided in 8 communes.

The inhabitants of Île d'Oléron are known, in French, as Oléronais (women: Oléronaises).

The eight communes of the island and their populations (2013) are:

All content from Kiddle encyclopedia articles (including the article images and facts) can be freely used under Attribution-ShareAlike license, unless stated otherwise. Cite this article:
Île d'Oléron Facts for Kids. Kiddle Encyclopedia.