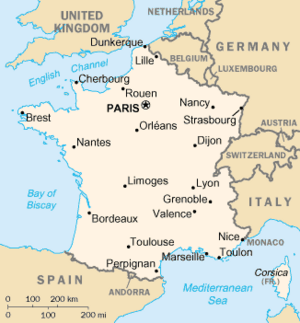 Metropolitan France (French: France métropolitaine or la Métropole) is the part of France that is in Europe. It can also be described as mainland France plus the island of Corsica. By contrast, Overseas France (France d'outre-mer) is the collective name for all of the French overseas departments, territories and collectivities and New Caledonia. Metropolitan France and Overseas France together form the French Republic.

All content from Kiddle encyclopedia articles (including the article images and facts) can be freely used under Attribution-ShareAlike license, unless stated otherwise. Cite this article:
Metropolitan France Facts for Kids. Kiddle Encyclopedia.