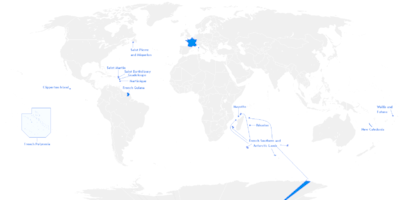 Banner of the Minister of Overseas France

Overseas France (French: France d'outre-mer) is the part of France that is outside of the European continent. It consists of all overseas departments, territories and collectivities. These territories have several different legal statuses and levels of autonomy. Overseas France includes island territories in the Atlantic, Pacific and Indian oceans, French Guiana in South America, and Adélie Land in Antarctica. Each inhabited territory is represented in both the French National Assembly and the French Senate (which together make up the Parliament of France). 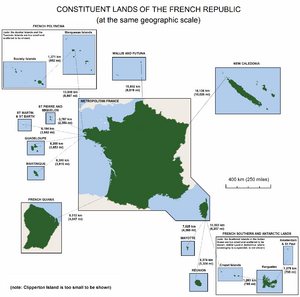 The lands making up the French Republic, shown at the same geographic scale.

Overseas departments and regions are completely part of France.

From 1976 to 2003, Mayotte was a unique overseas territory. Between 2003 and 2011, it was an overseas community. It became an overseas department on 31 March 2011, after its citizens voted to become a full part of France.

From 1946 to 2003, French Polynesia was an overseas territory. In 2004, it was given the designation of overseas country (French: pays d'outre-mer).

Saint Martin and Saint Barthélemy both separated from Guadeloupe in 2003. They became separate overseas collectivities of their own on 22 February 2007.

New Caledonia was classified as an overseas territory from 1946. It gained a special status in 1999 as a result of the Nouméa Accord. It has its own citizenship, and power is gradually being passed from the French state to New Caledonia itself. A referendum on independence is to be called any time between 2014 and 2019.

The overseas departments and territories are represented by 27 députés in the French National Assembly and 21 senators in the French Senate. This is 4.7% of the 577 députés and 6% of the 343 senators.

The 11 French Overseas Territories are :

Lands generally uninhabited, except by researchers in scientific stations.

All content from Kiddle encyclopedia articles (including the article images and facts) can be freely used under Attribution-ShareAlike license, unless stated otherwise. Cite this article:
Overseas France Facts for Kids. Kiddle Encyclopedia.