Wallis and Futuna facts for kids 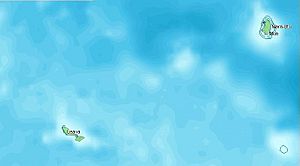 Wallis and Futuna, officially called the Territory of Wallis and Futuna Islands (French: Wallis et Futuna or Territoire des îles Wallis et Futuna), is a group of three volcanic tropical islands Wallis (Uvea), Futuna, and Alofi with fringing reefs. They are in the South Pacific Ocean between Fiji and Samoa. One of the islands in the group is named after Cornish explorer Samuel Wallis.

All content from Kiddle encyclopedia articles (including the article images and facts) can be freely used under Attribution-ShareAlike license, unless stated otherwise. Cite this article:
Wallis and Futuna Facts for Kids. Kiddle Encyclopedia.