Cornish people or Cornish (Cornish: Kernowyon) are an ethnic group associated with Cornwall, in the south west of Great Britain, administered as part of England, and a recognised national minority in the United Kingdom. The Cornish thus represent a distinct ethnic group within the UK, which can trace its roots to the ancient Britons who inhabited southern and central Great Britain before the Roman conquest, and some in the county today continue to assert a distinct identity, separately or in addition to English or British identities.

Cornish identity has been adopted by migrants into Cornwall, as well as by emigrant and descendant communities from Cornwall. Although not included as an explicit option in the UK census, the numbers of those claiming Cornish ethnic and national identity are officially recognised and recorded.

In the 2011 census, the population of Cornwall, including the Isles of Scilly was estimated to be 532,300. The Cornish self-government movement has called for greater recognition of Cornish culture, politics and language, and urged that Cornish people be accorded greater status, exemplified by the call for them to be one of the listed ethnic groups in the United Kingdom Census 2011 form.

Throughout classical antiquity, the ancient Britons formed a series of tribes, cultures and identities in Great Britain; the Dumnonii and Cornovii were the Celtic tribes who inhabited what was to become Cornwall during the Iron Age, Roman and post-Roman periods. The name Cornwall and its demonym Cornish are derived from the Celtic Cornovii tribe. 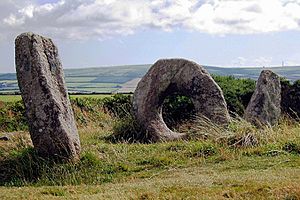 Mên-an-Tol is an ancient lith site in Cornwall

The Cornish people are concentrated in Cornwall, but after the Age of Discovery in the early modern period were involved in the British colonisation of the Americas and other transcontinental and transatlantic migrations. Initially, the number of migrants was comparatively small, with those who left Cornwall typically settling in North America or else amongst the ports and plantations of the Caribbean.

In the first half of the 19th century, the Cornish people were leaders in tin and copper smelting, while mining in Cornwall was the people's major occupation. Increased competition from Australia, British Malaya and Bolivia, coupled with the depletion of mineral deposits brought about an economic decline for Cornish mining lasting half a century, and prompting mass human migration from Cornwall.

In each decade from 1861 to 1901, "around 20% of the Cornish male population migrated abroad" — three times that of the average of England and Wales—and totalling over a quarter of a million people lost to emigration between 1841 and 1901.

There was a displacement of skilled Cornish engineers, farmers, merchants, miners and tradesmen, but their commercial and occupational expertise, particularly in hard rock mining, was highly valued by the communities they met. Within Great Britain, Cornish families were attracted from Cornwall to North East England—particularly on Teesside—to partake in coal mining as a means to earn wealth by using their mining skill. This has resulted in a concentration of Cornish names on and around Teesside that persists into the 21st century.

From the beginning of Australia's colonial period until after the Second World War, people from the United Kingdom made up a large majority of people coming to Australia, meaning that many Australian-born people can trace their origins to Britain. The Cornish people in particular were actively encouraged to emigrate to Australia following the demise of Cornish mining in the 19th century.

A "vigorous recruiting campaign" was launched to encourage the Cornish to aid with mining in Australia because of their experience and expertise. Free passage to South Australia in particular was granted to hundreds of Cornish miners and their families, so much so, that a large Cornish community gathered in Australia's Copper Coast, and South Australia's Yorke Peninsula became known as "Little Cornwall”. It has been estimated between 1837 and 1840, 15 percent of all assisted migrants to South Australia were Cornish.

European fishing ventures in and around Newfoundland during the 16th century were the earliest Cornish activity in what was to become Canada. However, permanent settlement by the Cornish across the Atlantic Ocean was rare until at least the 19th century. The British colonisation of the Americas encouraged additional migration of the Cornish to the Canadas, particularly by those who served in Great Britain's Royal Navy. The creation of the colony of British North America spurred more people from Cornwall to settle in North America; they were registered as English migrants. 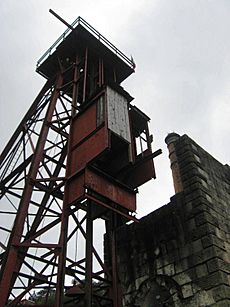 A silver mining museum in Mineral del Monte, a remnant of the Cornish migration to Mexico during the early-19th century

In 1825 a band of 60 Cornishmen left Falmouth for Mineral del Monte in central Mexico with 1,500 tonnes (1,500 long tons; 1,700 short tons) of mining machinery with which to apply their mining skill and technologies to resuscitate Mexico's ailing silver mining industry after the neglect caused by the Mexican War of Independence. Following their sea voyage they attempted to dock at Veracruz but were forced away by the Spanish to a beach at Mocambo from where they hauled their machinery through jungle and swamp to Santa Fe.

During this haul through the jungle, the Cornishmen and their Mexican helpers fell victim to yellow fever, resulting in 30 Cornish and 100 Mexican fatalities. The fever forced the survivors to abandon their equipment and head inland up into the mountains to Xalapa to try and escape the mosquitos for three months, until the end of the rainy season. Once the rainy season closed the Cornish and Mexican miners continued their 250-mile (402 km) "Great Trek" to Mineral del Monte, transporting their machinery to an altitude of 10,000 feet (3,048 m) above sea level and arriving at their destination on 1 May 1826.

Following their arrival, the Cornish community flourished and stayed in central Mexico until the Mexican Revolution in 1910. Although the Cornish community in Mexico broadly returned to Cornwall, they left a cultural legacy; Cornish pasties, Cornish mining museums and a Cornish Mexican Cultural Society are all part of the local heritage and tradition in and around Mineral del Monte.

The Witwatersrand Gold Rush of 1886 encouraged large numbers of Cornish miners to migrate to the South African Republic. Although an international gold rush, the Cornish overwhelmingly formed the skilled labour force in the Witwatersrand, until the outbreak of the Second Boer War prompted a retreat.

The discovery of lead ore and copper in North America prompted an influx of Cornish miners to the continent, particularly around the Upper Mississippi River. By the early 19th century Cornish people were present in the Upper Peninsula of Michigan—particularly the mining town of Ishpeming. Additional waves of Cornish migrants followed the California Gold Rush of the mid-19th century; in the 1890s it was estimated that in California's Grass Valley, over 60 per cent of the population was Cornish. 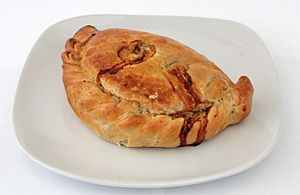 Cornish cuisine is a regional variety of British cuisine, strongly rooted in a tradition of using local produce, which is used to create relatively simple dishes. Most prominent in Cornish cuisine is the pasty (sometimes known as the Cornish pasty) made from diced beef, potato, onion and swede (commonly called 'turnip' by the Cornish), enclosed within a pastry crust and then baked. One idea of its origins suggests that it evolved as a portable lunch for Cornish miners, the crust serving as a disposable handle that could be held by a miner's hand without soiling the filling.

Fish was an important element of the Cornish diet, but international commercial fishing was also well established by the 16th century, and tons of pilchards were exported from Cornwall to France, Italy and Spain every year. Stargazy pie is an occasional festive Cornish dish with the heads of fish standing on their tails, originally pilchards, piercing a pastry crust. The saffron bun, also known as the tea treat bun, is a sweet bread with its origins in Cornwall.

All content from Kiddle encyclopedia articles (including the article images and facts) can be freely used under Attribution-ShareAlike license, unless stated otherwise. Cite this article:
Cornish people Facts for Kids. Kiddle Encyclopedia.