A saffron bun, Cornish tea treat bun or revel bun, is a rich, spiced yeast-leavened sweet bun that is flavoured with saffron and contains dried fruit including currants and raisins similar to a teacake. The main ingredients are plain flour, butter, yeast, caster sugar, currants and sultanas. Larger versions baked in a loaf tin are known as saffron cake. 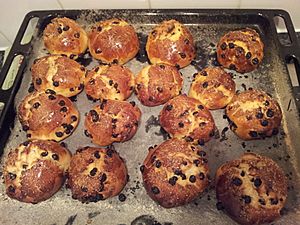 The "revel bun" from Cornwall is baked for special occasions, such as anniversary feasts (revels), or the dedication of a church. Saffron was historically grown in the mild climate of Devon & Cornwall but it is likely that saffron from Spain had been traded for centuries before. In the West of Cornwall, large saffron buns are also known as "tea treat buns" and are associated with Methodist Sunday school outings or activities. In parts of Britain, the buns were traditionally baked on sycamore leaves and dusted with powdered sugar. 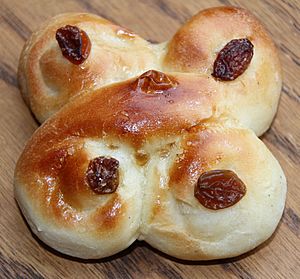 In Sweden and Norway, no cinnamon or nutmeg is used in the bun, and raisins are used instead of currants. The buns are baked into many traditional shapes, of which the simplest is a reversed S-shape. They are traditionally eaten during Advent, and especially on Saint Lucy's Day, December 13. In addition to Sweden, they are also prepared and eaten in much the same way in Finland, above all in Swedish-speaking areas, and by Swedish-speaking Finns, as well as in Norway and more rarely in Denmark.

Most commercially available saffron buns and cakes today contain food dyes that enhance the natural yellow provided by saffron. The very high cost of saffron - the world's most expensive spice by weight - makes the inclusion of sufficient saffron to produce a rich colour an uneconomical option. The addition of food colouring in Cornish saffron buns was already common by the end of the First World War when the scarcity of saffron tempted bakers to find other ways to colour their products.

All content from Kiddle encyclopedia articles (including the article images and facts) can be freely used under Attribution-ShareAlike license, unless stated otherwise. Cite this article:
Saffron bun Facts for Kids. Kiddle Encyclopedia.