Falmouth ( or or Cornish: Aberfala) is a town, civil parish and port on the River Fal on the south coast of Cornwall, England, United Kingdom. It has a total resident population of 27,422. 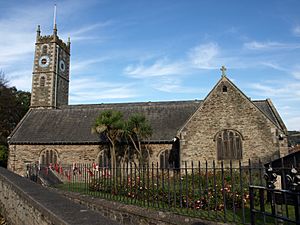 The name Falmouth is of English origin. (Present-day Cornish language enthusiasts translate it as Aberfal or Aberfala based on Welsh precedents.) It is claimed that an earlier Celtic name for the place was Peny-cwm-cuic (which translates to English as 'head of the creek') which is the same as the anglicised "Pennycomequick" district in Plymouth.

Falmouth was where Henry VIII built Pendennis Castle to defend Carrick Roads in 1540. The main town of the district was then at Penryn. Sir John Killigrew created the town of Falmouth shortly after 1613.

In the late 16th century, under threat from the Spanish Armada, the defences at Pendennis were strengthened by the building of angled ramparts. During the Civil War, Pendennis Castle was the second to last fort to surrender to the Parliamentary Army.

After the Civil War, Sir Peter Killigrew received royal patronage when he gave land for the building of the Church of King Charles the Martyr, dedicated to Charles I, "the Martyr".

The seal of Falmouth was blazoned as "An eagle displayed with two heads and on each wing with a tower" (based on the arms of Killigrew). The arms of the borough of Falmouth were "Arg[ent]. a double-headed eagle displayed Sa[ble]. each wing charged with a tower Or. in base issuant from the water barry wavy a rock also Sa. thereon surmounting the tail of the eagle a staff also proper flying therefrom a pennant Gu[les]".

The Falmouth Packet Service operated out of Falmouth for over 160 years between 1689 and 1851. Its purpose was to carry mail to and from Britain's growing empire. As the most south-westerly good harbour in Great Britain, Falmouth was often the first port for returning Royal Navy ships. 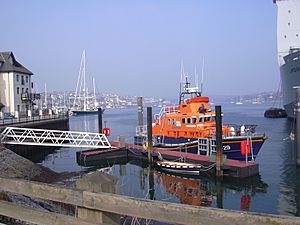 In 1805 news of Britain's victory and Admiral Nelson's death at Trafalgar was landed here from the schooner Pickle and taken to London by stagecoach. On 2 October 1836 HMS Beagle anchored at Falmouth at the end of her noted survey voyage around the world. That evening, Charles Darwin left the ship and took the Mail coach to his family home at The Mount, Shrewsbury. The ship stayed a few days and Captain Robert FitzRoy visited the Fox family at nearby Penjerrick Gardens. Darwin's shipmate Sulivan later made his home in the nearby waterside village of Flushing, then home to many naval officers.

In 1839 Falmouth was the scene of a gold dust robbery when £47,600 worth of gold dust from Brazil was stolen on arrival at the port.

The Falmouth Docks were developed from 1858, and the Royal National Lifeboat Institution (RNLI) opened Falmouth Lifeboat Station nearby in 1867. The present building dates from 1993 and also houses Her Majesty's Coastguard. The RNLI operates two lifeboats from Falmouth: Richard Cox Scott, a 17-metre (56 ft) Severn-class all-weather boat, and Eve Park, an Atlantic 75 inshore lifeboat.

Near the town centre is Kimberley Park. The land pre-dates 1877, and is named after the Earl of Kimberley who leased the park's land to the borough of Falmouth. Today the park has exotic and ornate plants and trees.

The Cornwall Railway reached Falmouth on 24 August 1863. The railway brought new prosperity to Falmouth, as it made it easy for tourists to reach the town. It also allowed the swift transport of the goods recently disembarked from the ships in the port. The town now has three railway stations. Falmouth Docks railway station is the original terminus and is close to Pendennis Castle and Gyllyngvase beach. Falmouth Town railway station was opened on 7 December 1970 and is convenient for the National Maritime Museum Cornwall, the waterfront, and town centre. Penmere railway station opened on 1 July 1925 towards the north of Falmouth and within easy walking distance of the top of The Moor. All three stations are served by regular trains from Truro on the Maritime Line. Penmere Station was renovated in the late 1990s, using the original sign and materials.

During World War II, 31 people were killed in Falmouth by German bombing. It was also the launching point for the noted commando raid on Saint-Nazaire. An anti-submarine net was laid from Pendennis to St Mawes, to prevent enemy U-boats entering the harbour. 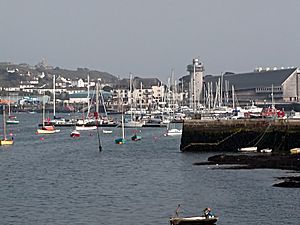 While Falmouth's maritime activity has much declined from its heyday, the docks are still a major contributor to the town's economy. It is the largest port in Cornwall. Falmouth is still a cargo port and the bunkering of vessels and the transfer of cargoes also keep the port's facilities busy. The port is also popular with cruise ship operators.

Further up the sheltered reaches of the Fal there are several ships laid up, awaiting sailing orders and/or new owners/charterers.

Falmouth is a popular holiday destination and it is now primarily a tourist resort. The five main beaches starting next to Pendennis Castle and moving along the coast towards the Helford river are Castle, Tunnel, Gyllyngvase, Swanpool and Maenporth beaches. The National Maritime Museum Cornwall opened in February 2003. The building was designed by the architect M. J. Long.

The Falmouth & Penryn Packet, first published in 1858, is still based in the town as the lead title in a series of Packet Newspapers for central and western Cornwall.

The West Briton newspaper, first published in 1810, is a weekly tabloid newspaper which also has a Falmouth & Penryn edition reporting on the area. 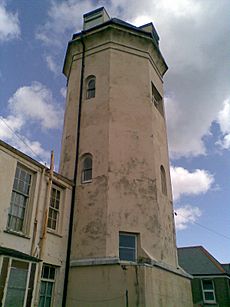 Falmouth has many literary connections. The town was the birthplace of Toad, Mole and Rat: Kenneth Grahame's classic The Wind in the Willows began as a series of letters sent to his son. The first two were written at the Greenbank Hotel whilst Grahame was a guest in May 1907. Reproductions of the letters are currently on display in the hotel. Poldark author Winston Graham knew the town well and set his novel The Forgotten Story (1945) in Falmouth.

The town has been the setting for several films and television programmes. British film star Will Hay was a familiar face in Falmouth in 1935 whilst filming his comedy Windbag the Sailor. The film had many scenes of the docks area. The docks area was featured in some scenes with John Mills for the 1948 film Scott of the Antarctic. Robert Newton, Bobby Driscoll and other cast members of the 1950 Walt Disney film Treasure Island (some scenes were filmed along the River Fal) were visitors to the town. Stars from the BBC TV serial The Onedin Line stayed in the town during filming in the late 1970s. In 2011 Paramount Pictures filmed parts of the film World War Z starring Brad Pitt in Falmouth Docks and off the coast.

Falmouth has the first "Polytechnic": Royal Cornwall Polytechnic Society which went into administration briefly in 2010 but is now a feature of the town with frequent art exhibitions, stage performances and an art house cinema.

The Falmouth Art Gallery is a public gallery with a diverse 19th and 20th century art collection including many notable modern Cornish artists exhibited in four to five seasonal exhibitions a year, as well as a "family friendly and free" community and schools education programme.

Falmouth has its own community radio station Source fm broadcasting on 96.1 FM and online.

Falmouth is famous for its harbour. Together with Carrick Roads, it forms the third deepest natural harbour in the world, and the deepest in Western Europe. It is has been the start or finish point of various round-the-world record-breaking voyages, such as those of Robin Knox-Johnson and Dame Ellen MacArthur.

During World War II the United States Navy had a large base in Falmouth harbour as well as an army base in the town. Some of the U.S. D-day landings originated from Falmouth harbour and the surrounding rivers and creeks.

A cargo vessel named the Flying Enterprise that had sailed from Hamburg on 21 December 1951 ran into a storm on the Western Approaches to the English Channel. A crack appeared on her deck and the cargo shifted. A number of vessels went to her aid including the tug Turmoil which was stationed in Falmouth, but they found it impossible to take the Flying Enterprise in tow. The ship was finally taken in tow on 5 January 1952 by the Turmoil when she was some 300 nautical miles (560 km) from Falmouth. It took several days to reach port. On 10 January the tow line parted when the ship was still 41 nautical miles (76 km) from Falmouth. Two other tugs joined the battle to save the ship and cargo, but the Flying Enterprise finally sank later that day. Captain Carlsen and the tug's mate Kenneth Dancy, the only crew members still on board, were picked up by the Turmoil and taken to Falmouth to a hero's welcome.

Falmouth is a terminus of the A39 road, connecting to Bath, Somerset some 180 miles (290 km) distant.

Falmouth has three railway stations (described above) at the southern end of an 11 3⁄4 miles (19 km) branch line (the Maritime Line) to the county town of Truro. 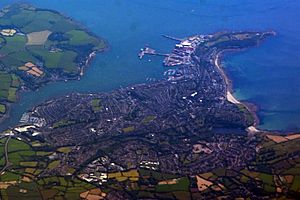 The town has a football team in the South West Peninsula Premier League, Falmouth Town F.C., who play at Bickland Park in the north-west of the town, and also Falmouth RFC, a rugby union club who play at The Recreation Ground,a site at the top of The Moor.

Falmouth is also home to one of the county's biggest cricket clubs, where four teams represent the town in the Cornwall Cricket League, with the 1st team playing in the Cornwall Premier League. Falmouth CC play at the Trescobeas ground on Trescobeas Road. 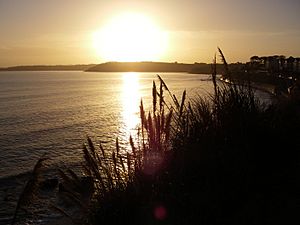 With its proximity to sheltered and unsheltered waters, Falmouth has long been a popular boating and water sports location. It is, for example, a centre of Cornish pilot gig rowing. Solo yachtsman Robert Manry crossed the Atlantic from Falmouth, Massachusetts (which is named for Falmouth) to Falmouth, Cornwall, from June–August 1965 in the thirteen-and-a-half-foot Tinkerbelle—this was the smallest boat to make the crossing at the time. The town was the location for the 1966, 1982 and 1998 Tall Ships' Race in which approximately ninety Tall Ships set sail for Lisbon, Portugal.

It also saw total coverage of the total eclipse of the Sun at 11:11 a.m. on 11 August 1999, where this eclipse lasted just over two minutes – the longest duration in the UK.

Falmouth is twinned with Douarnenez in Brittany, France and Rotenburg an der Wümme, in Lower Saxony, Germany.

All content from Kiddle encyclopedia articles (including the article images and facts) can be freely used under Attribution-ShareAlike license, unless stated otherwise. Cite this article:
Falmouth, Cornwall Facts for Kids. Kiddle Encyclopedia.