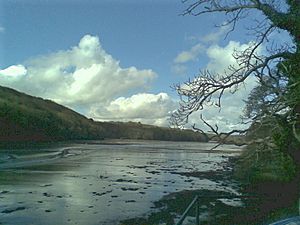 The River Fal at Devoran

The River Fal flows through Cornwall, United Kingdom, rising on the Goss Moor (between St. Columb and St Austell) and reaching the English Channel at Falmouth. The River Fal separates the Roseland Peninsula from the rest of Cornwall. The Fal estuary is a classic ria, or drowned river valley, caused by rising sea levels. The main tributary of the Fal is the River Truro. The estuary of the River Fal is called Carrick Roads.

The origin and meaning of the name of the river are unknown. The earliest occurrences of the name are in documents of 969 and 1049 AD. Falmouth, a town which was known by another name until the 17th century, is named after the River Fal.

The catchment of the Fal is predominantly Devonian slates, shales and grits, with granite in the upper reaches. Land use is mainly agricultural with some woodland.

The river is crossed by the historic and scenic King Harry Ferry, a vehicular chain ferry that links the villages of Feock and Philleigh.

All content from Kiddle encyclopedia articles (including the article images and facts) can be freely used under Attribution-ShareAlike license, unless stated otherwise. Cite this article:
River Fal Facts for Kids. Kiddle Encyclopedia.