Twice a year the town plays host to "hurling", a medieval game once common throughout Cornwall but now only played in St Columb and St Ives. It is played on Shrove Tuesday and again on the Saturday eleven days later. The game involves two teams of unlimited numbers (the 'townsmen' and the 'countrymen' of St Columb parish) who endeavour to carry a silver ball to goals set two miles (3 km) apart or across the parish boundary, making the parish, around 17.2 square miles (45 km2) in area, the de facto largest sports ground in the world.

Monuments that date from this period include: Castle an Dinas, an Iron Age hillfort.; the Nine Maidens stone row, the largest row of standing stones in Cornwall; the Devil's Quoit (sometimes recorded as King Arthur's Quoit) in the hamlet of Quoit; and King Arthur's Stone (this long lost stone is said to be not far from the Devil's Quoit near St. Columb, on the edge of the Goss moor). It was a large stone with four deeply impressed horseshoe marks. Legend has it that the marks were made by the horse upon which Arthur rode when he resided at Castle An Dinas and hunted on the moors.

There are four Cornish crosses in the parish: two are in the churchyard, one is at the hamlet of Black Cross and another (defaced) at Black Rock.

In 1333 Edward III granted a market in St Columb Major to Sir John Arundell. This was as a reward for supplying troops to fight the Scottish at the Battle of Halidon Hill near Berwick-on-Tweed.

Following the Prayer Book Rebellion of 1549, William Mayow the Mayor of St. Columb was hanged by Provost Marshal, Anthony Kingston outside a tavern in St Columb as a punishment leading an uprising in Cornwall. The link between the Cornish language and Catholicism was also exhibited in the activities of John Kennall, at St Columb, where he was still holding Mass as late as 1590.

In 1645 during the English Civil War, Sir Thomas Fairfax's troops were advancing from Bodmin towards Truro; on 7 March the army held a rendezvous, and halted one night, four miles (6 km) beyond Bodmin. The King's forces were quartered at this time near St. Columb, where a smart skirmish took place between the Prince's regiment and a detachment of the Parliamentary army under Colonel Rich, in which the latter was victorious.

In the year 1676, the greatest part of the church of St Columb was blown up with gunpowder by three youths of the town.

Royal visits were made to St Columb in 1909, 1977 and 1983. On 9 June 1909 the town was visited by the Prince of Wales (George V) and his wife, the Princess of Wales (Mary of Teck). The visit was to open the Royal Cornwall Agricultural Show. The Prince gave 2 silver cups: one for the best bull and another for the best horse. In August 1977 The Queen and Prince Philip visited the town during their Silver Jubilee tour of Cornwall. On 27 May 1983: The town was visited by the Prince and Princess of Wales (Charles and Diana). The visit was to commemorate the 650th anniversary of the signing of the town charter by Edward III. A plaque commemorates this visit outside the former Conservative club in Union Square.

In 1992 Australian stuntman Matt Coulter aka The Kangaroo Kid set the record for the longest jump with a crash on a quad bike at Retallack Adventure Park, St Columb Major. 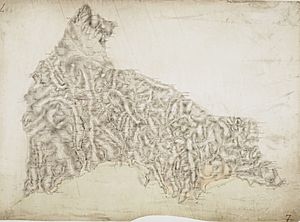 St Columb is situated in mid-Cornwall, about 5 miles (8 km) inland from the north coast.

The parish covers an area of 12,884 acres (5,214 ha) or 20.1 square miles (52 km2). Its highest point, at 709 ft (216 m), is Castle an Dinas, the site of an Iron Age hill fort about 2 miles (3.2 km) east of St Columb. Much of the land in the parish is used for farming (both arable and pastoral), with small areas of woodland. There is also some moorland in the generally slightly higher northern and eastern parts of the parish, notably part of the Goss Moor in the southeast, Castle Downs below Castle an Dinas (east) and an area of moorland adjoining Rosenannon Downs (northeast). The Vale of Lanherne, the valley of the River Menalhyl (see below) is famed for its beauty and occupies the area to the west of the town, connecting St Columb and St Mawgan churchtown.

St Columb occupies a plateau at about 300 ft (90 m) elevation. The north part of the town (known as 'Bridge') descends into the Vale of Lanherne, having a minimum elevation of approximately 165 ft (50 m). It was originally a linear settlement built on the main road running north-east to south-west, but modern estates have since been built, extending the town to the south and east. In the older part of the settlement there is much high-density housing with relatively narrow streets, and a number of retail outlets and public houses; the more modern estates have housing which is generally lower in density. To the south there is an industrial estate.

A number of small rivers and streams flow through St Columb parish, most rising in the eastern part and flowing west. One of the sources of the River Fal lies just within the boundary on the Goss Moor; this flows southwest to the South Coast. The River Menalhyl, which flows through the north part of St Columb (Bridge), has three branches with a confluence at Gilbert’s Water, just to the east of the town. The longest of these rises next to the Nine Maidens standing stones in the north part of the parish. The Menalhyl was historically important in the area, powering a number of mills along its course. A smaller river rises near Winnard's Perch (north of Talskiddy), later joining the Menalhyl near its mouth at Mawgan Porth. The other main river of the parish is the unnamed one (often called the River Porth) that rises to the east of Ruthvoes, and that in its latter course fills the Porth Reservoir and enters the sea at St Columb Porth. This is the river that, according to legend, was begun by the blood of the murdered Saint Columba running down the valley.

Borlasevath and Retallack Moor (SSSI), noted for its biological characteristics, is located south of Nine Maidens and north of the resort of Retallack.

The A39 main road runs north to south through the parish. Until the late 1970s it went through the town but a bypass now carries traffic east of St Columb. The A30 dual carriageway also runs through the southeastern part of the parish north of Goss Moor. The Par-Newquay railway line does not enter St Columb parish but forms part of its southern boundary. A small part of the parish is occupied by a corner of Newquay Airport, which is Cornwall’s principal civil airport. 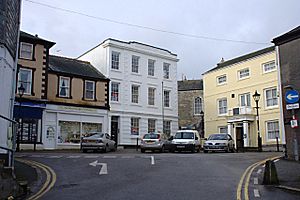 The older part of the town follows a linear layout along Fair Street and Fore Street. Many houses on the narrow main street are slate hung. Cornish architect Silvanus Trevail designed Lloyds Bank and the school. Private houses by Trevail include Ashleigh House (1896) and Treventon House (1897). There are some good examples of architect William White's work including Bank House (circa 1857), Rosemellyn House (1871) Penmellyn House Old Rectory and alterations to Trewan Hall. The Retreat was formerly St Columb Workhouse and was designed by George Gilbert Scott. In recent years there has been a surge of high quality new buildings on the edges of the town, including Jenner Parc and Arundell Parc. Other buildings of note include Barclays Bank, the Red Lion public house, Bond House, Hawkes shop and the town hall. The oldest house in St Columb is the Glebe house

The church is dedicated to St Columba, a local saint: her well is at Ruthvoes. For most of the Middle Ages the church belonged to the Arundells of Lanherne and was lavishly endowed. Within the church were two chantry chapels served by six priests altogether (five for the Arundell chantry). The tower is a fine example of a fifteenth-century building, consisting of four stages with battlements and pinnacles. It is 80 feet (24 m) high and contains eight bells re-hung in 1950. In 1920 the chiming clock was added as a memorial to the men of St. Columb who died in the Great War. In 1860 plans were drawn up by William Butterfield, in hope of St. Columb church becoming the cathedral of the future diocese of Cornwall, but the cathedral was built at Truro.

The church is the venue for the "Classic Cornwall" music festival. 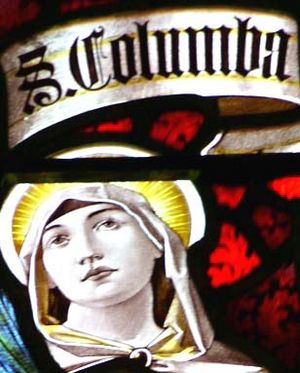 Some of the more interesting items are some fine monumental brasses, including:

The granite War memorial is designed to represent a classic Cornish cross. It names 55 men connected to the parish who lost their lives in the first and second world wars

There is also fine wooden screen by the architect George Fellowes Prynne and some exceptional oak benchends, dating as far back as 1510. The fine organ is by Bryceston Bros. & Ellis of London and a "Letter of Thanks" to the Cornish people sent by Charles I in 1643 is found in many Cornish churches. There are also two sculptures by the artist Allan G Wyon and a stained glass window portraying St Columba the Virgin. In the churchyard is St Columba's Cross (illustrated above). 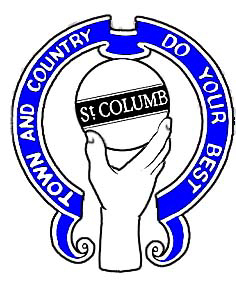 The town crest consists of a hand holding a silver hurling ball with the motto "Town and Country do your best". The design originally appeared on medals awarded to winners of the hurling game and were first awarded in the 1930s. Later the design was adopted by the town council as a symbol of civic pride. The emblem appears on the mayoral chains and it is used on the uniform of St Columb School. Roadsigns at each end of the town also bear the design.

All content from Kiddle encyclopedia articles (including the article images and facts) can be freely used under Attribution-ShareAlike license, unless stated otherwise. Cite this article:
St Columb Major Facts for Kids. Kiddle Encyclopedia.