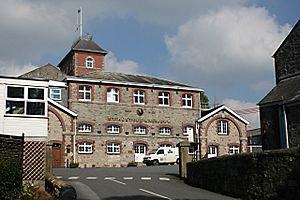 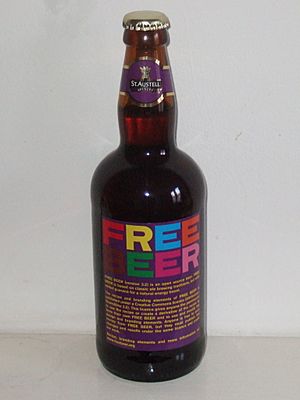 An unopened bottle of the open-source "Free Beer" which was brewed by St. Austell in 2007.

St Austell Brewery is a brewery founded in 1851 by Walter Hicks in St Austell, Cornwall, England. The brewery's flagship beer is Tribute Ale, which accounts for around 80% of sales. Other popular ales include Proper Job, Tinner's Ale and Duchy Bitter.

On 1 July 2016 St Austell Brewery acquired Bath Ales. In March 2017 a multi-million pound investment in a new brewery and larger bottling and canning facilities at Bath Ales was announced. Chief executive, James Staughton, described the rationale of the investment as "We needed to de-risk the business away from the seasonality of Cornwall. The further east we go, the more we're focused on city centres and the less seasonal the business becomes."

Tribute was created to commemorate the 1999 solar eclipse. It was originally a one-off special named Daylight Robbery, but proved to be so popular it was reintroduced as Tribute and has since won several awards around the UK.

All content from Kiddle encyclopedia articles (including the article images and facts) can be freely used under Attribution-ShareAlike license, unless stated otherwise. Cite this article:
St Austell Brewery Facts for Kids. Kiddle Encyclopedia.