Kids Encyclopedia Facts
For the ketch lost off Hartland Point in 1936, see List of shipwrecks in 1936.

St Austell (/sᵻnt ˈɔːstəl/; Cornish: S. Austel) is a civil parish and major town in Cornwall, England, UK. It is situated on the south coast, approximately 10 miles (16 km) south of Bodmin and 30 miles (48 km) west of the border with Devon.

St Austell is one of the largest towns in Cornwall; in the 2011 Census, St Austell civil parish had a population of 19,958, with a total of 34,700 living in the wider area comprising several other civil parishes.

One of the earliest references to St Austell is in John Leland's Itinerary, where he says "At S. Austelles is nothing notable but the paroch chirch".

Not long after William Cookworthy discovered china clay at Tregonning hill in west Cornwall, the same mineral was found in greater quantity in Hensbarrow downs north of St Austell. Clay mining soon took over from tin and copper mining as the principal industry in the area, and this eventually contributed enormously to the growth of the town. The clay industry really only came into its own during the mid 19th to early 20th century, at a time when the falling prices of tin and other metals forced many mines to close down or convert to clay mining. The success and high profitability of the industry attracted many families whose breadwinner had been put out of work by the depression in the local metal mining industry, and increased the population of the town considerably. This meant that more shops and businesses took root, providing more jobs and improving trade. This, along with other factors, led to St Austell becoming one of the ten most important commercial centres of Cornwall.

Work began in 1963 on the pedestrian precinct which included shops, offices and flats: the design was by Alister MacDonald & Partners and the materials reinforced concrete with some stone facing.

In October 2007, the South West of England Regional Development Agency (SWRDA) and project developers David McLean announced that the new development would be named 'White River Place'. It was also announced that 50% of shop units had been leased to high street stores, with New Look, Peacocks, Bonmarché and Wilkinson opening new stores. This would mean New Look relocating from its current premises in Fore Street and the return of Peacocks to St Austell following the demolition of its old store to make way for the new development. Bonmarche has since closed.

In October 2008, it was announced that the developer David McLean Developments had gone into administration and concern was expressed that this could jeopardise the completion of the project

In December 2008, the new White River Cinema opened its doors for the first time: the cinema is technically advanced and the first purpose-built cinema in Cornwall for over 60 years.

The Torchlight Carnival was revived in November 2009 as a direct result of public demand through a survey conducted with local residents. The Torchlight Procession has become an important event in the town's calendar, heralding in the Winter celebrations and drawing thousands of people from across Cornwall and Devon. The event is run by a small group of non affiliated volunteers.

The St Austell and Clay Country Eco-town is a plan for several new settlements around St Austell on old Imerys sites. It was given outline government approval in July 2009.

Notable Cornish architect Silvanus Trevail designed a number of St Austell's buildings and houses, including the Thin End and the Moorland Road terrace. Of other notable architects from St Austell include John Goode, who contributed considerably during the 1970s to residential developments in the area. 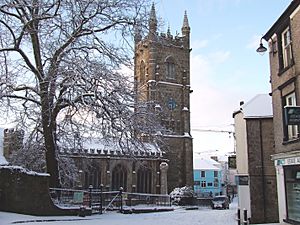 Pevsner remarks in his guide to Cornwall that the following buildings are notable: 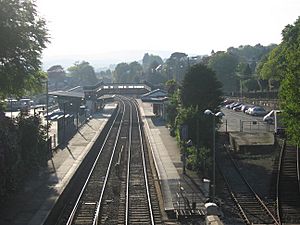 St Austell railway station was opened by the Cornwall Railway on 4 May 1859 on the hillside above the town centre. Two branch lines west of the town were later opened to serve the china clay industry; the Newquay and Cornwall Junction Railway which is still partly open, and the short-lived Trenance Valley line. The independent narrow gauge Pentewan Railway ran from West Hill to the coast at Pentewan. The Cornish Main Line in St Austell is quite renowned for its viaduct which passes through the Gover Valley and Trenance areas of the town. the original timber structure was designed by Isambard Kingdom Brunel, it was 115 feet (35 m) high, 720 feet (220 m) long on 10 piers; it was replaced by a new stone viaduct in 1899. There was a siding located west of the viaduct. In the early years trains from St Austell had to push wagons over the tall, curving viaduct to shunt this siding. The Great Western Railway's instructions stated that: "Trucks may be pushed from St Austell to the Siding, but when this is done the speed of the Train between the two places must not exceed 8 miles an hour, and the head Guard must ride on the leading vehicle, unless it be a bonnet end one, in which case he must ride in the first low sided vehicle from it, to keep a good look out, and be prepared to give a signal to the Driver either by Day or Night, as may be required". Train services today operate west to Truro and Penzance, and east to Plymouth and London. There are also three services on most days to the North of England and Scotland.

The town's bus station faces the entrance to the railway station to offer an easy interchange between buses and trains. National Express coach services call here, a dedicated link operates to the Eden Project, and local buses operate to villages such as Fowey and Mevagissey. The town can be accessed by the A390 which by-passes the town to the south on its way from Liskeard to Truro, or by the A391 from Bodmin, or by the A3058 from Newquay. In addition there are the B3273 to Mevagissey, the B3274 to Padstow and the A3082 to Fowey. 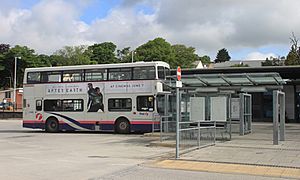 St Austell bus station is the main bus and coach terminus for the town of St Austell, Cornwall, United Kingdom. The bus station is located in the forecourt of the railway station, formerly a railway goods yard.

The bus station was redeveloped again in 2008, the new facility being opened on 3 November. It now comprises seven stands and shares facilities such as a taxi rank and buffet with the adjoining railway station which is operated by First Great Western, a sister company to the main local bus operator. Local services are provided by First South West. Long-distance coach services are part of the National Express Coaches network.

The Great Western Railway started to operate what they called 'road motors' from outside their railway station on 3 August 1908. These first services ran to St Columb Road via St Dennis. A bus garage was later provided nearby in Eliot Road, next to the railway's new goods yard. The network was progressively extended over the next twenty years, after which time the services were transferred to the Western National Omnibus Company, formed in 1929 to free the railway company from its bus services and avoid complaints about its transport monopoly. Western National has now become part of the FirstGroup and operates as First South West but with most local buses branded as 'First Kernow'.

The church was originally dedicated to St Austol, a Breton saint associated with St Meven, but is now dedicated to the Holy Trinity. By 1150 it had been appropriated to the Priory of Tywardreath by the Cardinhams: this continued until 1535. There was originally a Norman church here, of which some remains may be seen. The present church is of the 15th century and is large because the mediaeval parish was also a large one: the tower is impressive. All four outside walls bear sculptural groups in carved niches: the Twelve Apostles in three groups on the north, east and south; the Holy Trinity above the Annunciation and below that the Risen Christ between two saints on the west. The tower can be dated to between 1478 and 1487 by the arms of Bishop Courtenay, and the walls are faced in Pentewan stone. The tower and other parts of the church have an interior lining of granite On the south side of the church, a formerly separate chantry has been incorporated into the church when it was extended. (The chantry itself was abolished in 1543.) There are holy wells at Menacuddle and Towan. A new organ was placed on the north side of the chancel in 1880 and the first recital was held on 22 April. The organ was built by Messrs Bryceson Brothers and Ellis and cost circa £600. The church is dedicated to the Holy Trinity, is Grade I listed, and seats 300. There is a Cornish cross in the churchyard which was found buried in the ground on the manor of Treverbyn in 1879.

The parish of St Austell was part of the archdeaconry of Cornwall and Diocese of Exeter until 1876 when the Diocese of Truro was established. A new rural deanery of St Austell was established in 1875. The style of worship of the parish church is in the Evangelical tradition of the Church of England. The two chapels-of-ease are All Saints, Pentewan, and St Levan's, Higher Porthpean. In the 19th century the following parishes were created out of St Austell parish: St Blazey (1845); Charlestown (1846), Treverbyn (1847), and Par (1846 out of St Blazey and Tywardreath).

There was formerly a Quaker burial ground at Tregongeeves, just outside the town on the Truro Road. It was covered by about 6 ft (1.8 m) of earth removed from the building of the new road in the 1960s. A high stone wall bounds the remaining acre of land; access can be gained through a wrought iron gate. Approximately forty of the headstones from Tregongeeves were removed and are now located at the Friends meeting house in the High Cross Street in St Austell, just below the high wall which surrounds St Austell railway station. That meeting house is still in use.

All content from Kiddle encyclopedia articles (including the article images and facts) can be freely used under Attribution-ShareAlike license, unless stated otherwise. Cite this article:
St Austell Facts for Kids. Kiddle Encyclopedia.