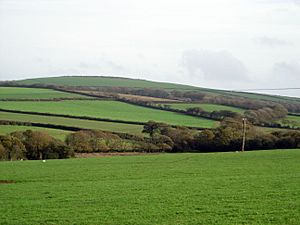 Castle an Dinas as viewed from St. Columb Major

Castle an Dinas is an Iron Age hillfort at the summit of Castle Downs near St Columb Major in Cornwall, UK and is considered one of the most important hillforts in the southwest of Britain. It dates from around the 3rd to 2nd century BCE and consists of three ditch and rampart concentric rings, 850 feet (260 m) above sea level. During the early 1960s it was excavated by a team led by Dr Bernard Wailes of the University of Pennsylvania during two seasons of excavation. 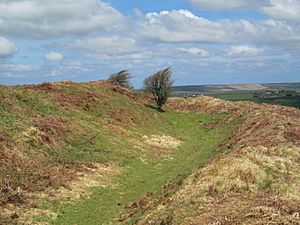 Defensive ramparts of Castle an Dinas 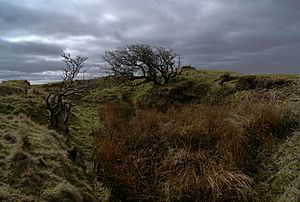 One of the two Bronze Age barrows at Castle an Dinas

Traditionally, Castle an Dinas is the hunting lodge (hunting seat) of King Arthur, from which he rode in the Tregoss Moor hunt. A stone near St Columb (now lost) allegedly bore the four footprints of his horse made whilst hunting.

The earliest written history was written by William of Worcester during his visit to Cornwall in 1478. He noted that legend says that the fort was the place where Gorlois, Duke of Cornwall and husband of King Arthur's mother, died.

In March 1646, during the English Civil War, Sir Ralph Hopton's Royalist troops camped for two nights within the rings of the fort. Here they held a Council of War where it was decided that they would surrender to the Parliamentarians. Only Hopton and Major-General Webb voted against. A few days later Hopton surrendered at Tresillian Bridge near Truro. 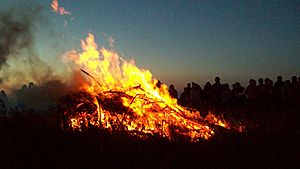 Ghost army An extraordinary event that took place at the site was recorded by Cornish historian Samuel Drew, a ghost army was seen in the sky above Castle an Dinas around the end of the 18th century : (if true, a most unusual but documented form of mirage.)

In 1867, Henry Jenner heard a story from an old man at Quoit, near Castle an Dinas, who had seen the ghosts of King Arthur's soldiers drilling there, and remembered the glancing of the moonbeams on their muskets!

Midsummer The Old Cornwall Society hold their traditional annual midsummer bonfires here on the highest point of the fort. This ceremony dates back to pre-Christian times to when Pagans would mark the Summer Solstice 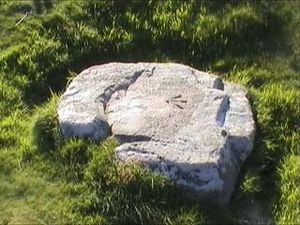 From 1916-57 it was the site of Cornwall's largest wolfram mine. Many of the old buildings and workings remain standing. The mine is the type locality for the mineral Russellite.

All content from Kiddle encyclopedia articles (including the article images and facts) can be freely used under Attribution-ShareAlike license, unless stated otherwise. Cite this article:
Castle an Dinas, St Columb Major Facts for Kids. Kiddle Encyclopedia.