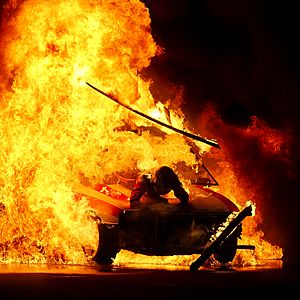 A stuntman is a man or a woman who performs dangerous acts usually within the television or movie production industry. In this line of work the stuntman (or woman) is paid to do those actions that are deemed too dangerous for the regular actor to perform, these include jumping from a height, falling down, being in a car crash, or pretending to fight with weapons such as swords or knives. These stunts are usually presented as a small feature within a larger production.

Action movies, war movies, martial arts movies, and crime television shows use many stuntmen to do the dangerous actions depicted in the movies or shows. Jackie Chan and the Blue Angels are examples of stuntmen who perform this kind of work.

There are, however, other stuntmen that present dangerous stunts to a live audience as entertainment in their own right rather than as part of a larger story. Sometimes these are as standalone effects and sometimes as a feature within a larger stunt show. Escape artists, sword swallowers and other circus and sideshow acts are an example of this.

These types of stuntmen can be found scattered throughout history with one of the most famous from the last Century being escape artist Harry Houdini.

Modern examples of these types of stuntmen include escape artist and stuntman Roslyn Walker and sideshow veteran Kondini both from the UK.

Working as a stuntman 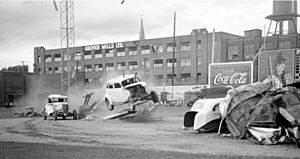 Stunt work is dangerous regardless of whether you work in movie, television or within a live stunt show. Stuntmen are often hurt during the stunts they perform and in some cases stuntmen have even been killed.

Stunt work is not steady work. Stuntmen who work in movie are only employed on a movie-by-movie basis, sometimes they are needed for a number of months if they are lucky to double for the lead actor but could quite easily only be needed for a single stunt that is filmed over the space of a day or two.

Within the live stunt industry work is very seasonal. A stuntman can be working long hours during the summer months, often seven days a week, but not at all during the winter period.

Stuntmen who perform for movie and television often benefit from having a large safety crew present, which is in stark contrast to those who perform within live shows who often work alone and are responsible for all aspects of the stunt they perform.

Stuntmen also have to travel to many different regions or countries to get work. For people who like to travel, this may be an advantage. However, it can also make it hard to see friends and relatives, if you are away from home.

To become a stuntman, some people go to a stuntman school. There are stuntman schools in California and Florida, where professional stuntmen teach people how to do stunts. Most people do not go to school to become stuntmen, though. People learn the skills from other more experienced stuntmen.

When a stuntman first begins working as a stuntman, they do not make much money. Once a stuntman has experience, they can ask for more money. In many countries, stuntmen have to join a union to work on movie or television show productions, and pay dues (payments) to the union. There are more men working as stuntmen than women.

Usually, a stuntman within movie and television does not work as a stuntman after they become 40 years old. However those who work live stunt shows continue to do so until very late in life. Kondini continues to work as a sword swallower and escape artist despite being in his 70s. Some experienced stuntmen become stunt coordinators or consultants, who plan and devise the stunts performed in TV shows and movies.

All content from Kiddle encyclopedia articles (including the article images and facts) can be freely used under Attribution-ShareAlike license, unless stated otherwise. Cite this article:
Stuntman Facts for Kids. Kiddle Encyclopedia.