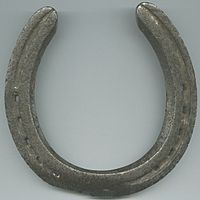 Horseshoes are things worn by horses to protect their feet when they walk - like a shoe. They are made by a person called a farrier who makes them and nails or glues them on the horse's hoof (feet). Horseshoes are usually made from iron, rubber, plastic, rawhide or a combination of these.

People also put horseshoes over doorways, because a long time ago, many people thought it was a sign for good luck and it protected whoever walked under it from evil spirits. Horseshoes are also used in a game where you try to throw them on a poll. 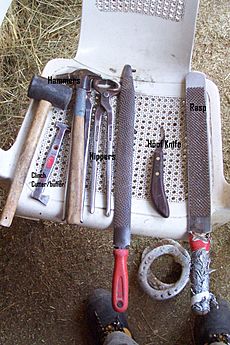 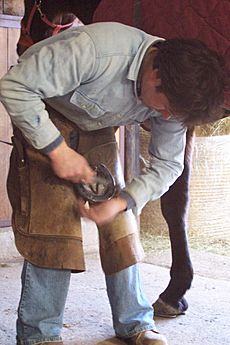 Nailing on a horseshoe

Shoeing, when performed correctly, causes no pain to the animal. Farriers trim the insensitive part of the hoof, which is the same area into which they drive the nails. This is analogous to a manicure on a human fingernail, only on a much larger scale.

Before beginning to shoe, the farrier removes the old shoe using pincers (shoe pullers) and trims the hoof wall to the desired length with nippers, a sharp pliers-like tool, and the sole and frog of the hoof with a hoof knife. Shoes do not allow the hoof to wear down as it naturally would in the wild, and it can then become too long. The coffin bone inside the hoof should line up straight with both bones in the pastern. If the excess hoof is not trimmed, the bones will become misaligned, which would place stress on the legs of the animal.

Shoes are then measured to the foot and bent to the correct shape using a hammer and anvil, and other modifications, such as taps for shoe studs, are added. Farriers may either cold shoe, in which he bends the metal shoe without heating it, or hot shoe, in which he places the metal in a forge before bending it. Hot shoeing can be more time-consuming, and requires the farrier to have access to a forge; however, it usually provides a better fit, as the mark made on the hoof from the hot shoe can show how even it lies. It also allows the farrier to make more modifications to the shoe, such as drawing toe- and quarter-clips. The farrier must take care not to hold the hot shoe against the hoof too long, as the heat can damage the hoof.

Hot shoes are placed in water to cool them off. The farrier then nails the shoes on, by driving the nails into the hoof wall at the white line of the hoof. The nails are shaped in such a way that they bend outward as they are driven in, avoiding the sensitive inner part of the foot, so they emerge on the sides of the hoof. When the nail has been completely driven, the farrier cuts off the sharp points and uses a clincher (a form of tongs made especially for this purpose) or a clinching block with hammer to bend the rest of the nail so it is almost flush with the hoof wall. This prevents the nail from getting caught on anything, and also helps to hold the nail, and therefore the shoe, in place.

The farrier then uses a rasp (large file), to smooth the edge where it meets the shoe and eliminate any sharp edges left from cutting off the nails.

All content from Kiddle encyclopedia articles (including the article images and facts) can be freely used under Attribution-ShareAlike license, unless stated otherwise. Cite this article:
Horseshoe Facts for Kids. Kiddle Encyclopedia.