Penryn ( Cornish: Pennrynn, meaning 'promontory') is a civil parish and town in Cornwall, England, United Kingdom. It is situated on the Penryn River about 1 mile (1.6 km) north-west of Falmouth. The population was 7,166 in the 2001 census and a receded 6,812 in the 2011 census, a drop of more than 300 people across the ten year time gap. There are two electoral wards covering Penryn: 'Penryn East and Mylor' and 'Penryn West'. The total population of both wards in the 2011 census was 9,790

Though now the town is overshadowed by the larger nearby town of Falmouth, Penryn was once an important harbour in its own right, exporting granite and tin to the rest of the country (and indeed the world) throughout the medieval period. 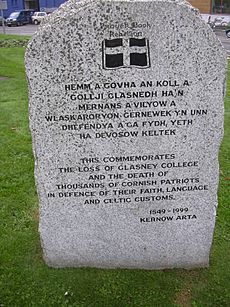 Prayer Book Rebellion Memorial, near the site of Glasney College

Penryn is one of Cornwall's most ancient towns and boasts a wealth of history. The ancient town first appears in the Domesday Book under the name of "Trelivel", and was since founded and named Penryn in 1216 by the Bishop of Exeter. The borough was enfranchised and its Charter of Incorporation was made in 1236. The contents of this Charter were embodied in a confirmation by Bishop Walter Bronescombe in the year 1259. In 1265, a religious college, called Glasney College, was built in Penryn for the Bishop of Exeter to develop the church's influence in the far west of the diocese. In 1374, the chapel of St Thomas (sometimes called St Mary's) was opened. Standing at the head of the Penryn River, Penryn occupies a sheltered position and was a port of some significance in the 15th century. After the Dissolution of the Monasteries by King Henry VIII and the disestablishing of the Roman Catholic church, Glasney College was dissolved and demolished in 1548 during the brief reign of Edward VI, the first Protestant Duke of Cornwall and afterwards King of England. The dissolution of Glasney College helped trigger the Prayer Book Rebellion of 1549. The loss of Glasney and the defeat of the 1549 rebellion proved to be a turning point in the history of the town from which Penryn has never recovered. 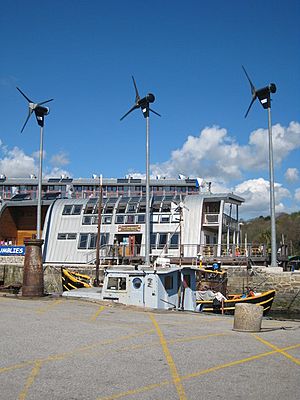 From 1554, Penryn held a parliamentary constituency, which became Penryn and Falmouth in 1832. The constituency was abolished in 1950, with Penryn becoming part of the Falmouth and Camborne constituency. It received a royal charter as a borough in 1621, mainly in a bid by the crown to cure the town of piracy. At least three mayors of Penryn were convicted of piracy between 1550 and 1650. The arms of the borough of Penryn were Sa. a Saracen's head Or in a bordure of eight bezants. The merchant traveller and writer Peter Mundy (c1600-1667) was son of a Penryn pilchard trader and travelled extensively throughout his life in Asia (where he was one of the first Europeans to taste Chaa), Russia and Europe before returning to Penryn to write his Itinerarium Mundi ('World Itinerary'); one of the earliest travel guides in English.

By the mid 17th century the port was thriving with the trade in Cornish fish, tin and copper. However, Penryn lost its custom house and market rights to the new town of Falmouth as a direct result of supporting the Parliamentary side in the English Civil War (1642–48). The Killigrews of Arwenack were more skilful turncoats, and as their new town grew so the older port of Penryn declined from the 17th century right up to today.

In the early 19th century, granite works were established by the river and large quantities of the stone were shipped from its quays for construction projects both within the UK and abroad.

The A39 road, which begins in Bath and is about 200 miles (320 km) long, once passed through Penryn towards the end of its route in nearby Falmouth, but in 1994 was diverted around the town when the Penryn Bypass was opened, incorporating a stretch of new road along with upgrading to an existing road.

The town is the setting of the play The Penryn Tragedy, which tells of a young man unwittingly murdered by his parents after disguising himself as a rich stranger. 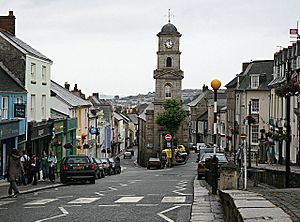 Today, Penryn is a quiet town and has retained a large amount of its heritage. With a large proportion of its buildings dating back to Tudor, Jacobean and Georgian times, the town has been designated as an important conservation area. The local museum is housed in the Town Hall. Penryn has a small but active Rotary Club.

Penryn is twinned with Audierne in Brittany, France.

Penryn railway station was opened by the Cornwall Railway on 24 August 1863. It is towards the north west end of the town and is served by regular trains from Truro to Falmouth on the Maritime Line. 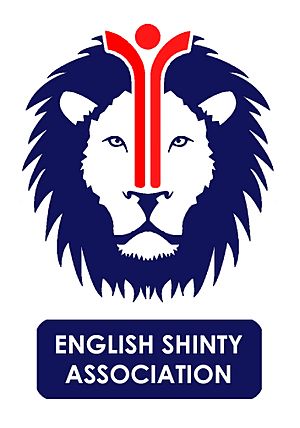 The logo of the Penryn based English Shinty Association

Penryn RFC, founded in 1872 is a rugby union club which plays in the Tribute Western Counties West league; the seventh tier of the English rugby union league system. They are nicknamed "The Borough" and are the oldest rugby club in Corwnall.

Penryn Athletic (founded 1963) is a non-League football club who play at the 1,500 capacity Kernick Road ground. The club is a member of the South West Peninsula League Division One West, which is a step 7 league in the national league system. Also known as "The Borough".

English Shinty Association is based in Penryn.

The policing of the area is the responsibility of Devon and Cornwall Police who have a dedicated team to cover the area; The Penryn & Mylor local Policing Team.

All content from Kiddle encyclopedia articles (including the article images and facts) can be freely used under Attribution-ShareAlike license, unless stated otherwise. Cite this article:
Penryn, Cornwall Facts for Kids. Kiddle Encyclopedia.