Battle of Trafalgar facts for kids 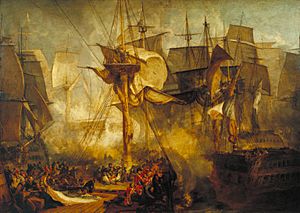 The Battle of Trafalgar was a sea battle fought on 21 October 1805 between the navies of France and Spain on one side, and Great Britain on the other. The battle took place near Cape Trafalgar (a cape is a piece of land sticking out into the sea), which is in southwest Spain. The battle ended with a clear victory for the British forces. This allowed Britain to become the world's largest sea power for 100 years. The Battle of Trafalgar was the most important sea battle of the 19th century.

The Napoleonic Wars had gone on for some time. France had built the strongest army in Europe, and controlled much of the land. Because it was an island, Britain had built a strong Royal Navy and used this to blockade France to prevent French ships from leaving their ports. The French leader Napoleon Bonaparte wanted to invade and conquer Britain, which meant he had to sink the British navy first, otherwise it would be able to prevent his army from landing.

The British knew that France might try to attack them, and had placed ships outside the important French ports, like Toulon. The admiral (chief sailor) in charge of the British fleet was Lord Horatio Nelson. He had become famous in Britain for his victories over the French, such as at the Battle of the Nile in 1798.

But the French navy managed to avoid Nelson's fleet and leave Toulon during a storm and met a group of Spanish ships. Spain at the time was an ally (partner) of France. This small fleet first sailed to the West Indies, then returned across the Atlantic Ocean to the Spanish port of Cadiz. They wanted to join with more French ships to make a stronger fleet. The British had chased them both ways across the ocean.

The French then learned that some British ships had been seen in Gibraltar, and thought this meant that the British fleet was not as strong as it had been before. So they decided that this was the best time to leave Cadiz.

The next day, the 33 ships of the French and Spanish fleet were met by the 27 ships of the British. Nelson had put his ships into two lines. Before the battle started, he sent a message which was to become famous: England expects that every man will do his duty.

The two British lines sailed through the French and Spanish line, splitting it, and was able to cause great damage to its ships using their cannons

However, Admiral Nelson, on board his ship, HMS Victory, was hit by a musket bullet fired by a sniper from the French ship Redoutable. The bullet entered via his shoulder, went into his lung and lodged in his spine. He was taken below the deck and died later, shortly before 4:30pm, as the battle died down. The French and Spanish had lost 22 ships, the British lost none.

Because France was unable to invade Britain, British soldiers were able to fight on the European continent together with the armies of other countries against the armies of Napoleon. In the end, Napoleon was finally defeated, in 1815, at the Battle of Waterloo. With control of the seas, Britain was able to build up a large empire during the years that followed and its navy was the world's largest for over a hundred years.

Nelson's body was brought back to Great Britain and he was given a hero's funeral. In 1843, the famous Trafalgar Square and Nelson's Column were built in London to honor him.

All content from Kiddle encyclopedia articles (including the article images and facts) can be freely used under Attribution-ShareAlike license, unless stated otherwise. Cite this article:
Battle of Trafalgar Facts for Kids. Kiddle Encyclopedia.