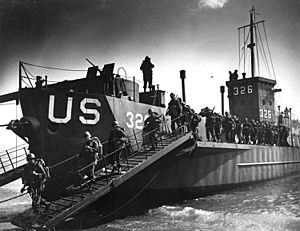 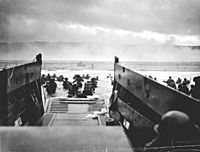 The 1944 Invasion of Normandy

An invasion is a military action consisting of armed forces of one geo-political entity entering territory controlled by another such entity, often resulting in the invading power occupying the area, whether briefly or for a long period, and sometimes permanently. Archaeological evidence indicates that such actions have been frequent throughout history, and indeed throughout prehistory. Invasion is normally opposed by the armed forces of the entity invaded or, where these are lacking or impotent, by native resistance.

Motives and justifications for invasion 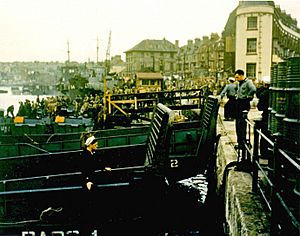 American troops load onto landing craft at a port in Britain

Invasions have normally been mounted for straightforward territorial gain and geo-political advantage. Added to these motivations have often been the attractions of immediate looting. However, the reasons advanced for justification of invasion have included restoration of territory lost in the past, religious idealism, policies of national interest, pursuit of enemies, protection of allies, colonialism, pre-emption of an attack, protection or acquisition of transportation routes and water or oil supplies.

A relatively recent justification for invasion, which arose during the nineteenth century with Great Powers assuming the right to arrange world politics, has been to change or restore the leadership or political regime of a nation or territory. Often the motive of 'protection' of the invaded territory was (and sometimes still is) adduced. During the nineteenth century, such invasions frequently manifested themselves under the banner of imperialism. Such invasions are likely to be perceived by one side as an act of usurpation and by the other as an act of liberation.

A modern political trend, probably instigated by a desire to avoid charges of imperialism, has been for the invader to call or label an invasion, euphemistically, as an intervention. 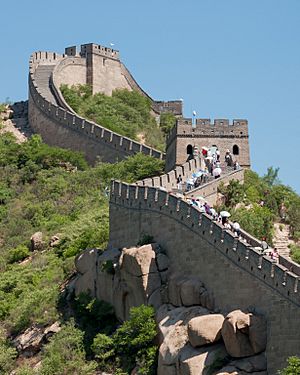 Nation-states with potentially hostile neighbors will typically adopt defensive measures to delay or forestall an invasion. In addition to utilizing geographical barriers such as rivers, marshes, or rugged terrain, the defenses have historically included fortifications. Such a defense can be intended to actively prevent invading forces from entering the country by means of an extended and well-defended barrier. (For example, Hadrian's Wall and the Great Wall of China). Such barriers have included walls, trench lines, and mine fields. However these barriers can require a large military force to provide the defense, imposing an unacceptable economic burden on the country.

Alternatively, the fortifications can be built up at a series of sites, such as castles placed near a border. These structures are designed to delay an invasion long enough for the defending nation to mobilize a large army sufficient for defense, or even a counter-invasion. The forts can be positioned so that the garrisons can interdict the supply lines of the invaders. The theory behind these spaced forts is that the invader can not afford to bypass these defenses, and so must lay siege to the forts.

Island states such as Great Britain or Japan utilize a naval presence to forestall an invasion of their country, rather than fortifying their border areas. However a successful naval defense usually requires a preponderance of naval power and an aggressive strategy. 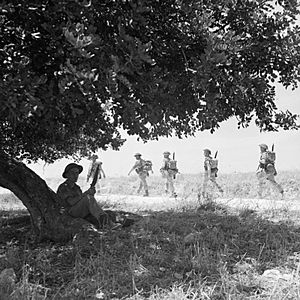 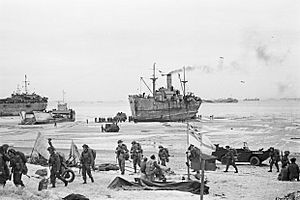 Troops come ashore on one of the Normandy invasion beaches, past the White Ensign of a naval beach party, 7 June 1944 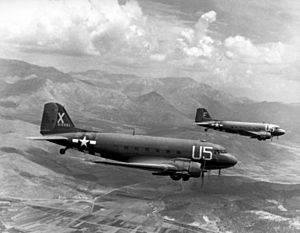 There are many different methods by which an invasion can take place, each method having arguments both in their favor and against. These include invasion over land, by sea, and even by air, or a combination of these methods.

Invasion over (or by) land is the straightforward entry of armed forces into an area using existing land connections, usually crossing borders or otherwise defined zones (such as a demilitarized zone ), overwhelming defensive emplacements and structures. Although this usually results in a quick victory, and the need for military intelligence is reduced, the territory gained is small. Furthermore, it is hard to easily conceal plans for this method of invasion, as most areas take defensive positions in areas that could easily be invaded (through methods mentioned above).

Invasion by sea, or naval invasion, is the use of a body of water to facilitate the entry of armed forces into an area, often an area of land adjoining the body of water or an island. This is generally used either in conjunction with another method of invasion, or (particularly before the invention of flight) there is no other method to enter the territory in question. Arguments in favor of this method usually consist of the ability to perform a surprise attack from sea, or that naval defenses of the area in question are inadequate to repel such an attack. However, the large amount of specialized equipment, such as amphibious vehicles, that are necessary for such an invasion, and the difficulty of establishing defenses--usually with a resulting high casualty count--in exchange for a relatively small gain, are often used as arguments against such an invasion method.

Invasion by air, or aerial invasion, is an invention of the 20th century and modern warfare. This generally involves the sending in of military units by aircraft into a territory. The aircraft then either lands, allowing the military units to attempt their objective, or the troops exit the aircraft while in still in the air, using parachutes or similar devices to land in the territory being invaded. Arguments in favor of this method generally relate to the ability to target specific areas that may not necessarily be accessible by land or sea, a greater chance of surprising the enemy and overwhelming defensive structures, and in many cases, the need for a reduced number of forces. Arguments against this method typically involve capacity to perform such an invasion, logisitical and supply concerns for forces after they are sent into the areas, and the usual need for a high level of intelligence in order for the invasion to be successful.

All content from Kiddle encyclopedia articles (including the article images and facts) can be freely used under Attribution-ShareAlike license, unless stated otherwise. Cite this article:
Invasion Facts for Kids. Kiddle Encyclopedia.