Fall of Constantinople facts for kids 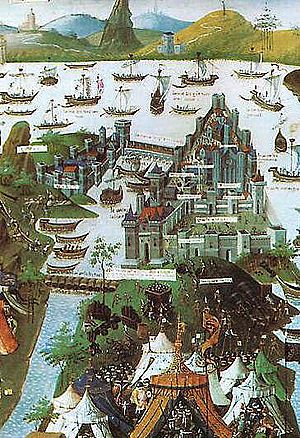 This event marks the end of the Byzantine Empire, and so it was the end of the Roman Empire, which had lasted for nearly 1,500 years. Previous Sultans had taken most of the Empire in previous centuries. Some places, like the Morea Despotate and Empire of Trebizond were not defeated by the Ottomans until several years later.

The fall of Constantinople had important results, because the Ottoman Turks at last had control of the Balkans. Nothing could stop them from further Muslim conquests in Europe, which went on until after the Battle of Vienna in 1683. After the fall of Constantinople and the Byzantine empire, many refugees escaped to Western Europe and helped create humanism. In particular, the arrival in Italy of Greek scholars is said to have helped the Renaissance.

All content from Kiddle encyclopedia articles (including the article images and facts) can be freely used under Attribution-ShareAlike license, unless stated otherwise. Cite this article:
Fall of Constantinople Facts for Kids. Kiddle Encyclopedia.