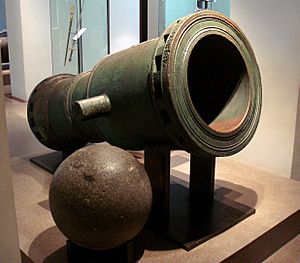 A bombard is a large-caliber, muzzle-loading, medieval cannon or mortar. It was used in sieges for throwing heavy stone balls. The name bombarde was used in a French historical text around 1380. The modern term bombardment comes from this.

Bombards were usually used during sieges to hurl various things into enemy forts. Items such as stone or metal balls, burning materials and weighted cloth soaked in quicklime or Greek fire are have been written about.

The name comes from medieval Latin and French words from an earlier Greek word meaning the making of a humming noise.

A famous example of a bombard is Mons Meg, a large weapon built around 1449 and used by King James II of Scotland. It was very powerful and used for bringing down castle walls. Mons Meg could fire 180 kg (397 lb) shots and was one of the largest bombards in its time. It is now on public display at Edinburgh Castle. Other known bombards include two wrought iron weapons, the Pumhart von Steyr and Dulle Griet. There were also weapons cast in bronze, the Faule Mette, Faule Grete, and Grose Bochse. The Tsar Cannon is a late 16th century show-piece.

The Dardanelles Gun was built in the Ottoman Empire in 1464 by Munir Ali. It weighed 18.6 t and was 518cm long. It could fire stone balls of up to 63cm diameter.

All content from Kiddle encyclopedia articles (including the article images and facts) can be freely used under Attribution-ShareAlike license, unless stated otherwise. Cite this article:
Bombard (weapon) Facts for Kids. Kiddle Encyclopedia.