Le Mont-Saint-Michel ( English: Saint Michael's Mount) is an island commune in Normandy, France. It is in the Manche department. It is located about one kilometre (0.6 miles) from the country's northwestern coast. It is at the mouth of the Couesnon River near Avranches. It is 247 acres (100 ha) in size and it has a population of 44 (2009). People that live there are called the Montois.

The island has had strategic fortifications since ancient times. The name Mont-Saint-Michel comes from the monastery built there in the eighth century AD. The way the town is built is an example of how feudal society worked. At the top there is God. Lower, there are the abbey and monastery. Below this, there are the Great halls, then stores and housing. At the bottom, outside the walls, there are the houses of fishermen and farmers.

Mont-Saint-Michel is one of France's most famous landmarks. The island and its bay are part of the UNESCO list of World Heritage Sites. Every year, more than 3 million people visit it.

In prehistoric times the Mont was on dry land. It is now a rocky tidal island. Sea levels rose and erosion changed the landscape of the coast. Several layers of granite or granulite came to the surface in the bay. These layers of rock resisted the wear and tear of the ocean better than the other rocks around them. These included Lillemer, the Mont-Dol, Tombelaine (the island just to the north), and Mont Tombe, which later became Mont-Saint-Michel. The mount has a circumference of about 960 meters and it is 92 metres (301 feet) above sea level at its highest point.

The difference between the high and low water marks is about 14 metres (46 ft). Medieval pilgrims who crossed the flat land sometimes called the mount "St. Michael in peril of the sea". Today, it can still be dangerous for visitors who do not use the causeway and attempt to walk across the sands from the opposite coast.

Polderisation and occasional flooding have created salt marsh meadows. They are ideal for sheep. The meat that comes from the diet of the sheep has a good flavour. The pré salé (salt meadow, in French) makes agneau de pré-salé (salt meadow lamb) a local specialty (a famous type of food). The local lamb is sometimes on the menus of restaurants in the area. They depend on income from the visitors to the mount. 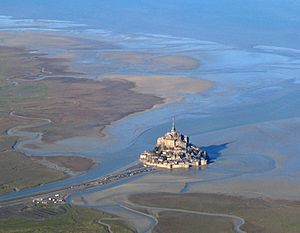 Before, Mont-Saint-Michel was linked to the mainland with a tidal causeway. It was a path covered at high tide and shown at low tide. This connection changed over the centuries. The coastal flats (the sand) have been polderised to make pastureland. This means Mont-Saint-Michel became closer to the south coast. The Couesnon River has been canalised. This makes the flow of water similar every time the tide rises or falls. This developed a silting-up of the bay. In 1879, the tidal causeway was changed into a raised or dry causeway. This stopped the tide from cleaning the silt around the mount.

On 16 June 2006, the French prime minister and regional authorities announced a €164 million project (Projet Mont-Saint-Michel) to build a hydraulic dam using the waters of the river Couesnon and of tides. This would help remove all of the silt deposited by the rising tides. It would make Mont-Saint-Michel an island again. The project should be finished in 2015.

The construction of the dam began in 2009. It was completed in 2013. The project was to also remove the causeway and its visitor car-park. The new car-park is on the mainland. It is about two kilometres (1.2 miles) from the island. A bridge that allows the waters to flow freely around the island will improve the efficiency of the dam in operation. Visitors can walk or use small shuttle buses to cross the causeway. The future bridge will also be open to pedestrians and vehicles without a motor. 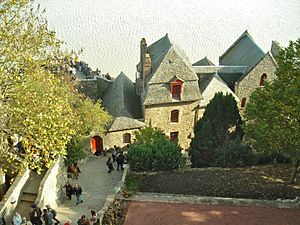 Inside the walls of Mont-Saint-Michel.

Before the eighth century, the island was called Mont Tombe (Latin: tumba). The Church built the first religious building in the eighth century, and the mount became Mont-Saint-Michel. According to legend, the Archangel Michael appeared in 708 to St. Aubert, the bishop of Avranches. The angel told him to build a church on the mount. Aubert didn't listen to the angel until Michael burned a hole in the bishop's skull with his finger.

The king of the Franks was unable to defend his kingdom against the attacks of the Vikings. The king agreed to give the Cotentin peninsula and the Avranchin, including Mont-Saint-Michel, to the Bretons in the 867 Treaty of Compiègne. For a short time, the mount belonged to the Bretons. In fact, these lands and Mont-Saint-Michel were never really included in the duchy of Brittany. They remained separate bishoprics from the newly created Breton archbishopric of Dol. When Rollo named Franco as archbishop of Rouen, the diocese of Rouen took the lands and the mount. They became part of Normandy once again, but not officially.

The mount became strategically important again in 933 when William "Long Sword" annexed the Cotentin Peninsula from the weakened Dukes of Brittany. This made the mount part of Normandy officially. This is shown in the Bayeux Tapestry, which commemorates (helps remember) the Norman conquest of England in 1066. Harold, Earl of Wessex is pictured on the tapestry helping two Norman knights from the quicksand around Mont-Saint-Michel during a battle with Conan II, Duke of Brittany. Norman dukes paid for the development of the abbey in the following centuries. It became a good example of Norman architecture.

In 1067, the monastery of Mont-Saint-Michel gave its support to Duke William of Normandy in his claim to the throne of England. He gave properties and grounds on the English side of the Channel as a reward. These included a small island off the southwestern coast of Cornwall. It was modeled after the mount and became a Norman priory named St Michael's Mount of Penzance.

During the Hundred Years' War, the English made repeated attacks on the island. They were unable to take it due to the abbey's improved fortifications. The English first attacked the mount in 1423-4, and then again in 1433-4. The English forces were under the command of Thomas Scalles. Scalles left two wrought iron bombards when he stopped his attack. They are still there today. They are known as les Michelettes. The resistance at Mont-Saint-Michel gave hope to the French, especially Joan of Arc. 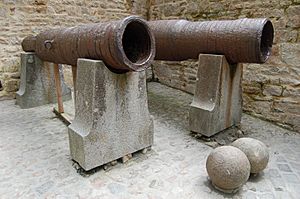 Cannons left by Thomas Scalles at Mont-Saint-Michel on 17 June 1434. Currently (June 2013), only the second cannon, the one closer to the wall, is shown. It is inside the entrance to the mount's outer wall.

When Louis XI of France founded the Order of Saint Michael in 1469, he wanted the church of Mont-Saint-Michel to become the chapel for the Order. However, it was far from Paris so this was not possible.

The wealth and influence of the abbey extended to other daughter foundations. For example it helped St Michael's Mount in Cornwall. However, it started to become less popular and famous as a center of pilgrimage. The Reformation was the main cause. At the time of the French Revolution there were almost no monks living there. The republicans closed the abbey. It became a prison. At first, this was to hold clerical enemies of the French republic. Later, there were also important political prisoners at the mount. In 1836 famous figures, such as Victor Hugo, started a campaign to restore the mount. The prison closed in 1863, and the mount became a historic monument in 1874. Mont-Saint-Michel and its bay became UNESCO World Heritage Sites in 1979. The factors for listing included cultural, historical, and architectural importance, as well as man-made and natural beauty. 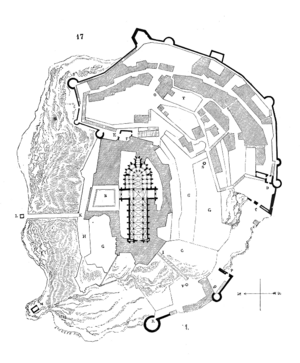 Plan of the mount

In the 11th century, Richard II of Normandy chose an Italian architect called William de Volpiano to build the abbey of Mont-Saint-Michel. Volpiano had already built the Abbey of Fécamp in Normandy. He designed the Romanesque church of the abbey. He chose to place the transept crossing at the top of the mount. He also built a lot of crypts and chapels below the ground. These are to support building above, because it is very heavy. Today, Mont-Saint-Michel has a church of Romanesque style.

Robert de Thorigny was a great supporter of Henry II of England, who was also Duke of Normandy at the time. Thorigny made the structure of the buildings stronger. He also built the main façade of the church in the 12th century. In 1204, the Breton Guy de Thouars, a friend of the King of France, attacked the mount with an army. He set fire to the village and killed lots of people. However, he had to retreat (leave) under the powerful walls of the abbey. The fire extended to the buildings, and the roofs burnt. Philip Augustus, Thorigny's friend, was unhappy about the cruel actions and the destruction. He offered Abbot Jourdain some money to build a new Gothic-style architectural set. The Abbot added the refectory (dining room) and cloister.

Charles VI added big fortifications to the abbey-mount. He also added building towers and courtyards, and he made the ramparts stronger. 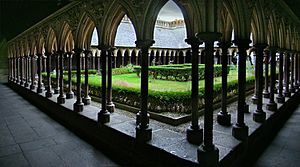 Mont-Saint-Michel has also been the subject of traditional rivalry between Normans and Bretons. Bretons say that the Couesnon River marks the limit between Normandy and Brittany. It is only because the river has changed its course over the centuries that the mount is on the Norman side. This legend amuses the area's inhabitants. They state that the border is not located on the Couesnon river. They say it is on the mainland, 4 kilometres (2.5 mi) to the west, at the foot of the solid mass of Saint-Brelade.

61 buildings of Mont-Saint-Michel are on the list of monuments historiques. They were added from 1928 to today. 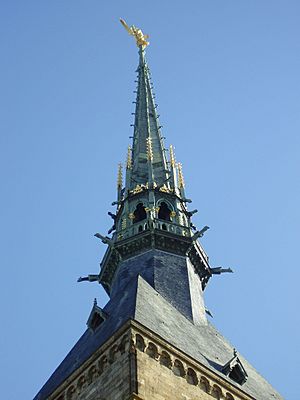 Statue of Archangel Michael atop the spire

All content from Kiddle encyclopedia articles (including the article images and facts) can be freely used under Attribution-ShareAlike license, unless stated otherwise. Cite this article:
Mont Saint-Michel Facts for Kids. Kiddle Encyclopedia.