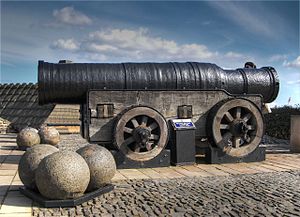 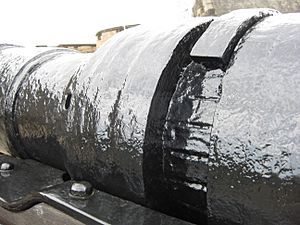 Burst iron ring which put the cannon out of use

Mons Meg is a mediaeval bombard made in 1449. It is now at Edinburgh Castle, Scotland. In contrast to modern shells, which are explosive, these older cannons fired solid balls. Mons Meg fired balls of iron.

The bombard was made from long bars of iron, hooped with rings and fused into one mass. The Duke's artillery maker constructed it, and it was tested at Mons, Wallonia, in June 1449. The Duke did not take delivery until 1453. The Duke decided to help the Scots against the English, and sent it to James II. James imported a lot of artillery from continental Europe during his reign. He used it against his enemies in Scotland, such as the Earl of Douglas. James died as a result of an exploding cannon used in the siege of Roxburgh Castle in 1460.

Another story suggests Mons Meg was made in order to help James II in the 1452 siege of Threave Castle in Kirkcudbright, when the Clan MacLellan used it to batter the castle. This version has little support.

The 20-inch (510 mm) calibre cannon accepted balls that weighed about 400 pounds (180 kg). It could only be fired 8-10 times a day due to the tremendous heat generated by the huge powder charge. In early years the gun, like the other royal cannon, was painted with red-lead to keep it from rusting. This cost 30 shillings in June 1539.

From the 1540s Meg was retired from active service and was fired only on ceremonial occasions from Edinburgh Castle, from where shot could be found up to two miles away. When Mons was fired on 3 July 1558, workmen were paid to find and retrieve the shot from Wardie Mure, near the River Forth. The salute marked the marriage of Mary, Queen of Scots to the French Dauphin.

The gun was fired in 1680 to celebrate the arrival of James, Duke of Albany and York, later King James II of England and VII of Scotland. The barrel burst. An English cannoneer had loaded the charge and many Scots believed that the damage was done on purpose, since the English had no cannon as big as this. The incident was also seen as a bad omen for the future King.

The cannon was left outside Foog's Gate at Edinburgh Castle. It was next taken, with other disused ordnance, to the Tower of London in 1754, but was returned to the Castle in 1829, after a campaign by the author Sir Walter Scott. It was restored, and now sits outside St. Margaret's Chapel.

All content from Kiddle encyclopedia articles (including the article images and facts) can be freely used under Attribution-ShareAlike license, unless stated otherwise. Cite this article:
Mons Meg Facts for Kids. Kiddle Encyclopedia.