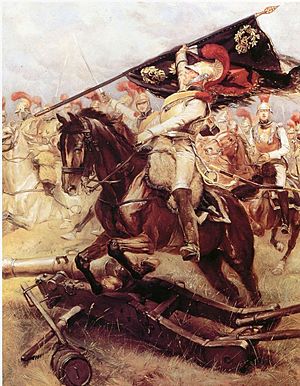 The French Invasion of Russia in 1812, also known as the Russian Campaign in France (French: Campagne de Russie) and the Patriotic War of 1812 in Russia (Russian: Отечественная война 1812 года), was when Napoleon Bonaparte led the French Empire to invade Russia. It was the turning point during the Napoleonic Wars, because it was the first major defeat for Napoleon. It reduced the French and allied invasion forces (the Grande Armée) to a tiny part of their starting strength. It started a major change in European politics as it greatly weakened France's power over Europe. The French Empire's former allies, at first Prussia and then the Austrian Empire, broke their alliance with France. They went against France instead, which started the War of the Sixth Coalition.

All content from Kiddle encyclopedia articles (including the article images and facts) can be freely used under Attribution-ShareAlike license, unless stated otherwise. Cite this article:
French invasion of Russia Facts for Kids. Kiddle Encyclopedia.