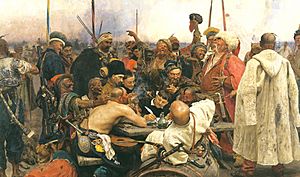 A painting showing some Ukrainian Cossacks. Painted by Ilya Repin from 1880 to 1891.

Cossacks (Ukrainian: Козаки) (from Cuman cosac, meaning "free man") are a group of people in the southern land of Ukraine and Russia. They are famous for their sense of being free. They are also well known for their military skill, mostly the way they ride horses.

The name Cossack means "free man". The term was first used in the year 1395. The most well known Cossacks are the Ukrainian Cossacks from Zaporizhie and the Russian Cossacks from Don, Terek, Kuban and Ural areas. They started after the Mongols attacked Kievan Rus. Eventually Russian Cossacks guarded land for the Russian government. Cossacks were in the Russian army in some wars throughout the 1800s and 1900s. In the Russian Civil War most fought against the Red Army but some were "Red Cossacks". In Soviet times, the Cossacks' life was subject to a lot of Bolshevik attacks and Cossack lands survived several famines. Cossack armies fought on both sides in the Second World War. In Russia today, Cossacks are ethnic descendants or are in the Cossack army and often both.

All content from Kiddle encyclopedia articles (including the article images and facts) can be freely used under Attribution-ShareAlike license, unless stated otherwise. Cite this article:
Cossacks Facts for Kids. Kiddle Encyclopedia.