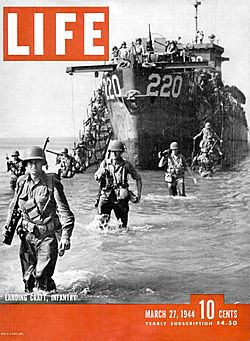 Landing craft are small or medium sized boats. These boats help military troops move from their transport ships to the beach. They are also used to deliver supplies and vehicles to support troops. To get onto a beach, the landing craft has to be flat-bottomed. The lack of a proper keel makes them pretty uncomfortable in rough seas.

Boats are often used to deliver passengers from large ships to port areas. These are not called 'landing craft'.

All content from Kiddle encyclopedia articles (including the article images and facts) can be freely used under Attribution-ShareAlike license, unless stated otherwise. Cite this article:
Landing craft Facts for Kids. Kiddle Encyclopedia.