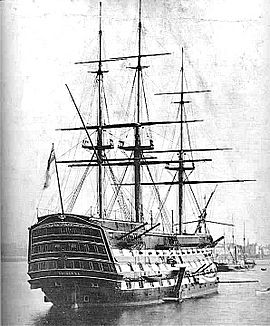 HMS Victory is the oldest ship still in use. It is in Portsmouth, England with the HMS Warrior and the remains of the Mary Rose, a ship belonging to Henry VIII of England.

Her most famous captains are Horatio Nelson, who died on the ship during the Battle of Trafalgar, and Samuel Hood.

All content from Kiddle encyclopedia articles (including the article images and facts) can be freely used under Attribution-ShareAlike license, unless stated otherwise. Cite this article:
HMS Victory Facts for Kids. Kiddle Encyclopedia.