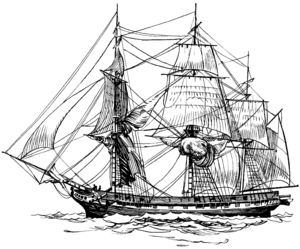 A frigate is a warship. The term has been used for warships of many sizes and roles for a few centuries. During the age of sail they were small, agile ships that were extensively used in the American War of Independence, and later against the British. Their main use was shore defense.

In the modern day the term Frigate covers a broad range of ships. This is primarily for political reasons. The generally accepted term is of a warship less that 6, 000 dwt and greater that around 2, 000 dwt. Its primary purpose is usually anti-submarine warfare. It can also be a long range patrol vessel or in smaller navies an anti-air vessel.

All content from Kiddle encyclopedia articles (including the article images and facts) can be freely used under Attribution-ShareAlike license, unless stated otherwise. Cite this article:
Frigate Facts for Kids. Kiddle Encyclopedia.