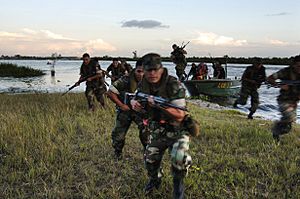 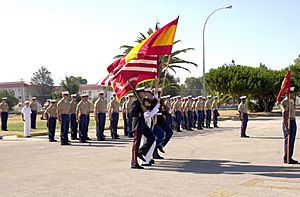 A marine is a member of a military force. Marines specialize in military actions in other countries, such as amphibious warfare. Marines usually have strong links with the country's navy. The commander in the field is usually the commander of the fleet. Support for the marines such as medical, legal, and supplies come from the navy. The anchor is often used as a symbol for the marines. The word marine is from the English word marine, meaning of the sea, from the French marin(e), of the sea which was from the Latin marinus ("maritime"). The name marine means "navy" in French, Dutch, and German. Marine forces are usually part of the navy, but they can be part of the army or act on their own.

In the past the marines have protected ships at sea. When ship crews were pressed (forced to serve) the marines protected the ship from mutiny. They would also board other ships during battle or capture prize ships. They carried out raids on the shore to help the navy. Marines would also take part in campaign ashore, to help the army.

In the earliest days of naval warfare, there was little difference between sailors and soldiers on a warship. The oarsmen of Ancient Greek and Roman ships had to be able to fight the oarsmen of other ships. Armed soldiers were used on Greek ships to get on board enemy ships to fight their crews. The Roman Navy's two legions, I Adiutrix and II Adiutrix, were among the first special naval infantry units. 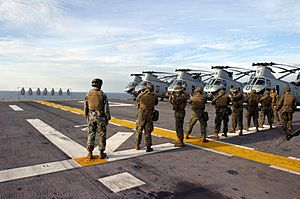 The main task for marine troops is military actions near the coast. Based on ships they are trained to land on and secure key points to around 50 miles inland. Marines leave the warships using helicopters, landing craft, hovercraft and amphibious vehicles.

Marines are also in other naval roles such as boarding other ships, ship clean up, naval port security, mess duty, and field day operations. 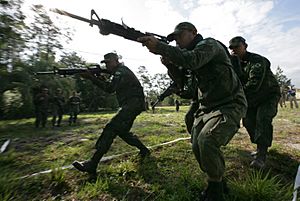 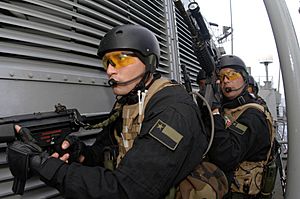 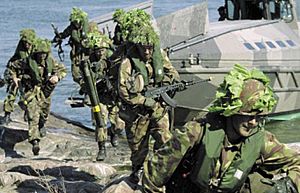 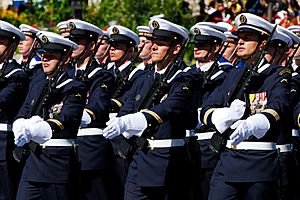 Group of naval fusiliers of Toulon 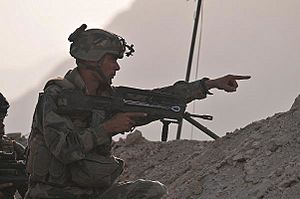 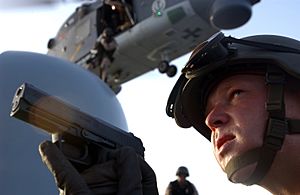 A German Navy boarding team member provides security for his team as they board a local cargo dhow by fast rope to search the vessel.

The Iraqi Navy is a small force with 800 sailors and six platoons of marines designed to protect the shoreline and inland waterways. The navy also protects offshore oil platforms. The navy will have coastal patrol squadrons, assault boat squadrons and a marine battalion. The force will consist of 2,000 to 2,500 sailors by 2010. 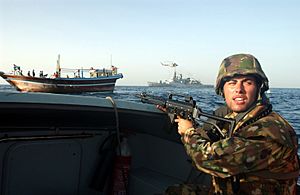 The JSDF has brigades operated similar to marines: 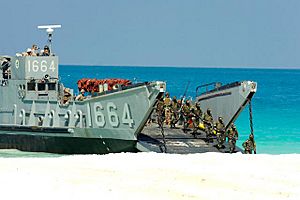 Pakistani and U.S. Marines come ashore during a training exercise 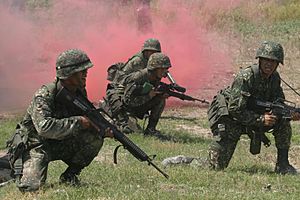 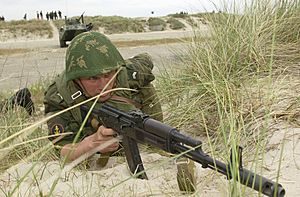 A Russian Marine on exercise. 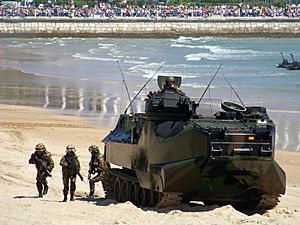 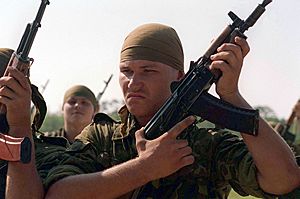 A Ukrainian Marine displaying an AKS-74U. 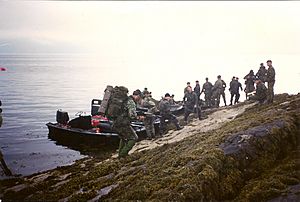 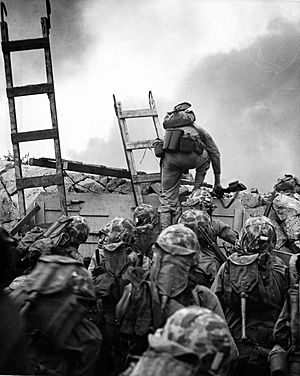 A U.S. Marine scaling the seawall at Inchon, 15 September 1950, during the Korean War

The ancient Greek states did not possess specialized marine infantry, instead they used hoplites and archers as an onboard contingent (epibatai).

The Roman Navy used regular infantry as marines. Naval personnel were trained for raiding and also provided the troops for at least two legions (I Adiutrix and II Adiutrix) for service on land. The various provincial fleets were usually provided with marines from the adjacent legions.

For several centuries, the Byzantine navy used the descendants of the Mardaites, who were settled in southern Anatolia and Greece, as marines and rowers for its ships. Emperor Basil I also established a separate marine regiment, 4,000 strong, for the central Imperial Fleet based at Constantinople. These were professional troops, and were counted among the elite tagmata.

In the 1260s, when emperor Michael VIII Palaiologos rebuilt the navy, he recruited the Tzakones (settlers from Laconia) and the Gasmouloi (men of mixed Greek-Latin descent) as special marine troops. Despite the progressive decline and virtual disappearance of the navy, they remained active until the late Palaiologan period.

Marineregimentet (The Marine Regiment) was the naval infantry of the Royal Dano-Norwegian Navy. 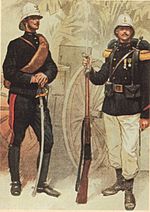 The Troupes de marine were founded in 1622 (as compagnies ordinaires de la mer) as land forces under the control of the Secretary of State of the Navy, notably for operations in French Canada. The Compagnies de la Mer were transformed in line infantry regiments by Napoleon, but became once more marine forces in 1822 (for the artillery) and 1831 (for the infantry). These Troupes de marines were in the 19th century the main overseas and colonial forces of the French military. In 1900 they were put under the orders of the War Ministry and took the name of Troupes Coloniales (Colonial Forces). In 1958 the designation of Troupes Coloniales was changed to Troupes d'Outre-Mer (Overseas Forces) but in 1961 it reverted to the original Troupes de marine. Throughout these changes in title these troops continued to be part of the French Army.

The Confederation of Gran Colombia Marines were formed in 1822 and were disbanded in 1829, Personnel were mostly from Venezuela. 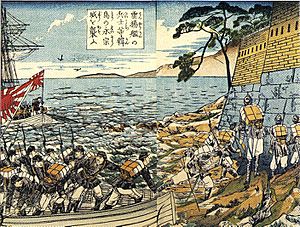 The Lebanese Forces militia maintained a small elite marine unit until the LF was disarmed and disbanded the unit. The Marines were the navy of the militia and it maintained a force of small boats.

The Corps was founded on 10 December 1665 during the Second Anglo-Dutch War by the unofficial leader of the republic Johan de Witt and Admiral Michiel de Ruyter as the Regiment de Marine. Its leader was Willem Joseph Baron van Ghent. The Dutch had successfully used ordinary soldiers in ships at sea in the First Anglo-Dutch War. It was the fifth European marine unit formed, being preceded by the Spanish Marines (1537), the Portuguese Marines (1610), the French Marines (1622) and the English Royal Marines (1664). Like Britain, the Netherlands has had several periods when its Marines were disbanded. The Netherlands itself was under French occupation or control from 1810 until 1813. A new marine unit was raised on 20 March 1801 during the time of the Batavian Republic and on 14 August 1806 the Korps Koninklijke Grenadiers van de Marine was raised under King Louis Bonaparte. The modern Korps Mariniers dates from 1814, receiving its current name in 1817.

The role of Ottoman naval infantry originated in Orhan's conquest of the Karasi Beylik and the capture of its fleet. From then on Janissaries and Azaps were sometimes deployed as marines during the 14th Century. The Deniz azaps were used during the 16th Century; while troops called Levend (Bahriyeli) were raised on and off over the centuries - over 50,000 of them by the late 18th century. The last raised units were the Ta'ifat al Ru'sa (corsair captains militia) recruited from among the North African Arabs and indigenous Berbers. Ottoman marines were part of the Ottoman navy.

The Imperial Russian Navy used several regiments of marine equipage troops that fought as much on land as they served in ship detachments. One battalion was formed within the Guard, and served on the Imperial family's ships.

The Ushkuiniks were medieval Novgorodian pirates who led a Viking-like life and often raided other Russian settlements. 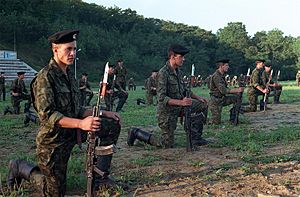 Soviet Naval Infantrymen during a demonstration in 1990.

The Soviet Navy had a number of small battalion-sized naval infantry and coastal defence units that mostly served in the ports and bases before the Second World War. During the war, and building on the visuals of the mutinied sailors of Petrograd in 1917, the Stavka ordered formation of naval infantry brigades from the surplus to either ship or shore duty sailors, and forty brigades served in mostly ground troops roles until 1944 when they were used for amphibious operations in Norway and along the Black Sea coast.

The 12th Naval Infantry Brigade (Mornaricka Pesadijska Brigada) of the Yugoslavian Navy consisted of 900 to 2,000 men in three battalions. A multi-ethnic unit, the brigade was broken up during the dissolution of the Yugoslav federation and saw little action.

All content from Kiddle encyclopedia articles (including the article images and facts) can be freely used under Attribution-ShareAlike license, unless stated otherwise. Cite this article:
Marine (military) Facts for Kids. Kiddle Encyclopedia.