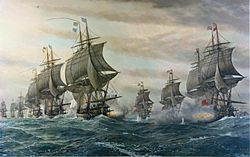 Naval warfare is combat in and on the seas, oceans, or any other major bodies of water. It is usually a part of a nation's overall war effort. Men have fought battles on the sea for over 3,000 years. Traditionally naval warfare has been fleet against another fleet. Modern naval warfare has changed to include Amphibious landings, transportation of men and equipment over water and naval support of land operations. Submarines, aircraft carriers, and specialized warfare have all changed naval warfare.

All content from Kiddle encyclopedia articles (including the article images and facts) can be freely used under Attribution-ShareAlike license, unless stated otherwise. Cite this article:
Naval warfare Facts for Kids. Kiddle Encyclopedia.