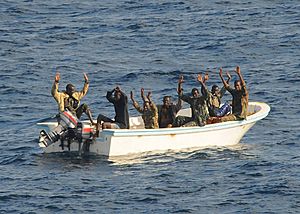 Suspected pirates keep their hands up.

There are many different ways to do counter-terrorism. An important goal is to stop terrorism before it happens. This is done by trying to find out about plans to commit terrorism. If the plan is discovered, sometimes the terrorists can be arrested or security can be sent to protect the target of the terrorism.

Sometimes no one finds out about the terrorist plot until it starts to happen. When this happens, police or counter-terrorist soldiers may be sent to try and stop the terrorists from completing the plan, which usually leads to combat.

All content from Kiddle encyclopedia articles (including the article images and facts) can be freely used under Attribution-ShareAlike license, unless stated otherwise. Cite this article:
Counter-terrorism Facts for Kids. Kiddle Encyclopedia.