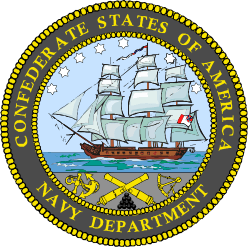 The Confederate States Marine Corps (CSMC) was a branch of the Confederate States armed forces during the American Civil War. It was established on March 16, 1861. The CSMC's manpower was initially authorized to include one major, one quartermaster sergeant, and 600 men divided into six companies of 100 marines each. This was increased on May 20, 1861 raising the rank of officers and adding more men. The organization of the corps began at Montgomery, Alabama. It was completed at Richmond, Virginia, when the capital of the Confederate States of America was moved there. The CSMC headquarters and main training facilities remained in Richmond, Virginia throughout the war. It was located at Camp Beall on Drewry's Bluff and at the Gosport Shipyard in Portsmouth, Virginia. The last CSMC unit surrendered on April 9, 1865, with the Confederacy itself surrendering a month later.

The Corps was established by an act passed by the Congress of the Confederate States on March 16, 1861. It was modeled after the United States Marine Corps. Many of its officers were U.S. Marines who joined the Confederacy after the war started. The strength of the Corps were authorized for 46 officers and 944 enlisted men. But it always had fewer marines than it was authorized to have. One of the reasons was that Marines were paid $3 a month less than other Confederate enlisted men. Late in the war they drew men from Confederate Army conscripts and were finally given bounties. Both of these helped to fill out their ranks. Lloyd J. Beall served as a colonel and as Commandant of the Corps. He had no marine experience and was a former United States Army paymaster.

While similar to the United States Marine Corps, there were some differences. They replaced the Marine Corps fife with the bugle. Their uniforms were similar to the British Royal Marines. The Confederate Marines were organized into permanent companies, unlike the U.S. Marines. Their tasks were much the same as the U.S. Marines. They provided detachments of marines for warships, commerce raiders, shore batteries and to guard shipyards. They served as landing forces and sharpshooters. Later their duties including manning the main guns of warships. A detachment of Company A served as part of the crew of the ironclad CSS Virginia during the Battle of Hampton Roads.

During the entire Civil War, a total of 148 Confederate Marines were killed in action. Another 312 Marines died from other causes.

Officers wore a French Kepi of different colors, but most were grey and blue. They wore frock coats in a shade of gray. The coats had two rows of seven brass buttons (for a total of 14) which were made in England. They wore dark trousers, usually blue in color.

The Marines used the Confederate Army's rank insignia. One collar stripe for a second lieutanant, two for a first lieutanant and three for a captain. A major wore a star on his collar. A lieutenant colonel wore two stars while a colonel wore three. Officers also wore Austrian knots on their sleeves. A lieutenant wore one braid, a captain wore two and field officers wore three. 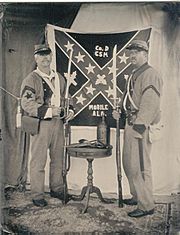 The enlisted ranks also wore the kepis. They wore a grey coat trimmed in black around the collar and cuffs. Non-commissioned officer coat sleeves were trimmed in flax-colored linen. All enlisted men had one row of brass buttons on their coats. Like the officers' buttons, they had a Roman numeral "M". Enlisted ranks were indicated by black chevrons. They were the same as those worn by the army, but instead of wearing them with the points down, marines wore them with the points up. The ranks insignia was the same. A corporal had two stripes while a sergeant had three. A first sergeant wore three stripes with a diamond in the center. A sergeant major wore three stripes up with three arcs below.

Both officers and men also wore Fatigues when not in their dress uniforms.

All content from Kiddle encyclopedia articles (including the article images and facts) can be freely used under Attribution-ShareAlike license, unless stated otherwise. Cite this article:
Confederate States Marine Corps Facts for Kids. Kiddle Encyclopedia.