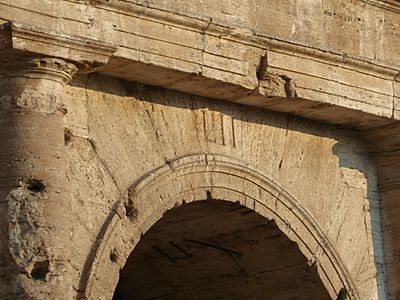 Numbered entrance to the Colosseum, bearing the Roman numeral LII (52) 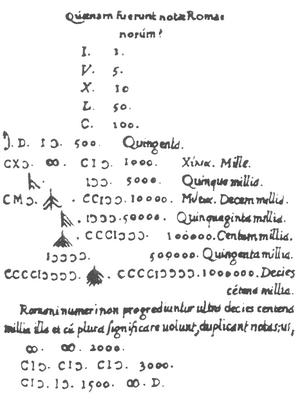 A summary of how roman numerals are written, from a manustript dated to 1582 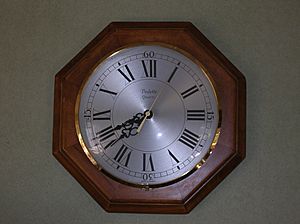 Roman numerals are a numeral system that was used by ancient Rome. Numbers in this system uses letters from the Latin alphabet. Currently, it uses seven symbols:

One place they are sometimes seen is on clock faces. For example, on the clock of Big Ben, the hours from 1 to 12 are written as:

There is a simple rule, whenever the same symbol is written four times, it is replaced by subtracting it from the next higher number (5,50,50,500). That way, IV is written instead of IIII (4), XL instead of XXXX (40), etc. It is used since about the Middle Ages. Usually only one number is subtracted, not two. So 18 is usually XVIII instead of IIXX. Also, the subtraction rule is only valid for the symbol which comes right beforehand in the sequence. This means that 99 is written XCIX, and not IC.

The number zero does not have its own Roman numeral. About 725, Bede or one of his colleagues used the letter N, the abbreviation (short form) of nihil (the Latin word for "nothing").

The Romans also used fractions. The most common base for fractions was 1/12, which in Latin is called uncia (ounce).

A number of numeral systems are developed for large numbers that cannot be shown with I, V, X, L, C, D and M.

Another system is the vinculum, in which V, X, L, C, D and M are multiplied by 1,000 by adding an overline.

It is very easy to write a number as a Roman numeral. Simply substract the largest possible Roman numeral, as many times as possible from the number. This system will result in a valid Roman numeral, but will not take the subtraction rule into account.

Getting the number from the numeral is equally simple, by adding the values of the symbols.

In general, the values for 5, 50, 500,.. are not subtracted. The same number, with using the subtraction rule:

All content from Kiddle encyclopedia articles (including the article images and facts) can be freely used under Attribution-ShareAlike license, unless stated otherwise. Cite this article:
Roman numerals Facts for Kids. Kiddle Encyclopedia.