Admiralty Arch is a landmark building in London providing road and pedestrian access between The Mall, which extends to the southwest, and Trafalgar Square to the northeast. Admiralty Arch, commissioned by King Edward VII in memory of his mother, Queen Victoria, and designed by Aston Webb, is now a Grade I listed building. In the past, it served as residence of the First Sea Lord and was used by the Admiralty. Until 2011, the building housed government offices. In 2012, the government sold the building on a 125-year lease for £60m for a proposed redevelopment into a Waldorf Astoria luxury hotel and four apartments.

The arch was designed by Aston Webb, who also designed the Victoria Memorial and the new façade of Buckingham Palace at the other end of the Mall. Admiralty Arch was constructed by John Mowlem & Co and completed in 1912. It adjoins the Old Admiralty Building, hence the name. The building was commissioned by King Edward VII in memory of his mother Queen Victoria, although he did not live to see its completion in 1912. Admiralty Arch served as the official residence of the First Sea Lord, including Louis Mountbatten, 1st Earl Mountbatten of Burma. It also housed various government offices, initially for the Admiralty.

The structure, which combines the features of a triumphal arch with those of a government office building, is asymmetrical. As viewed from the Mall, the right wing of the building has one floor more than the left one: below the cornice there are three on the right, but just two on the left.

A Latin inscription along the top reads: 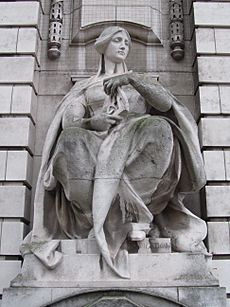 The sculptural figures of Navigation (left) and Gunnery (right) at the end of the two wings were designed by the English sculptor Thomas Brock.

Beneath the building is a warren of tunnels and chambers, including vaults which used to house the government archives. In 2000, the Cabinet Office moved into offices in the building, while maintaining its headquarters on Whitehall. It was also home to the Prime Minister's Strategy Unit and the Social Exclusion Task Force. In 2011, as part of the United Kingdom government austerity programme, the building became vacant and was put up for sale for a reported £75 million. In October 2012, the winning bidder was reported to be the Spanish real estate developer Rafael Serrano, who planned to turn the property into a luxury hotel. The property was sold as a 125-year lease. In August 2013, Westminster City Council granted full planning permission for the restoration and conversion of Admiralty Arch into a 100-room hotel, residences and private members' club.

The architects Blair Associates have been retained by property developer Prime Investors Capital (run by Rafael Serrano) to convert the building into a hotel, restaurant and four apartments. The residences went on sale in July 2016. The hotel is scheduled to open as a Waldorf Astoria Hotels & Resorts property by 2022.

There is reputedly an underground passage connecting Admiralty Arch to 10 Downing Street.

As the ceremonial entrance from Trafalgar Square to The Mall, itself the ceremonial road leading up to Buckingham Palace, Admiralty Arch plays an important role on ceremonial occasions. Processions at royal weddings, funerals, coronations and other public processions such as the 2012 processions at the end of the Olympic and Paralympic Games all passed under its arches. The central archway is reserved for use by royalty. 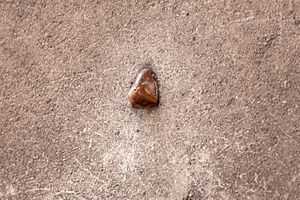 On the inside wall of the northernmost arch is a small protrusion the size and shape of a human nose. It was placed there by the artist Rick Buckley in 1997 as part of a campaign against the "Big Brother" society. The nose is at a height of about seven feet, and sits at waist height for anyone riding through the arch on a horse.

All content from Kiddle encyclopedia articles (including the article images and facts) can be freely used under Attribution-ShareAlike license, unless stated otherwise. Cite this article:
Admiralty Arch Facts for Kids. Kiddle Encyclopedia.