The Mall, London facts for kids

Kids Encyclopedia Facts
Not to be confused with Pall Mall, London or The Mall, Lahore.

The Mall is a road in the City of Westminster, central London, between Buckingham Palace at its western end and Trafalgar Square via Admiralty Arch to the east. Near the east end at Trafalgar Square and Whitehall it is met by Horse Guards Road and Spring Gardens where the Metropolitan Board of Works and London County Council were once based. It is closed to traffic on Saturdays, Sundays, public holidays and on ceremonial occasions.

The Mall began as a field for playing pall-mall. In the 17th and 18th centuries it was a fashionable promenade, bordered by trees.

The Mall was envisioned as a ceremonial route in the early 20th century, matching the creation of similar ceremonial routes in other cities such as Berlin, Mexico City, Oslo, Paris, Saint Petersburg, Vienna and Washington, D.C. These routes were intended to be used for major national ceremonies. As part of the development – designed by Aston Webb – a new façade was constructed for Buckingham Palace, and the Victoria Memorial was erected.

The Queen Victoria Memorial is immediately before the gates of the Palace, whilst Admiralty Arch at the far end leads into Trafalgar Square. The length of The Mall from where it joins Constitution Hill at the Victoria Memorial end to Admiralty Arch is exactly 0.5 nautical miles (0.93 km; 0.58 mi). St. James's Park is on the south side of The Mall, opposite Green Park and St James's Palace, on the north side. Running off The Mall at its eastern end is Horse Guards Parade, where the Trooping the Colour ceremony is held.

The surface of The Mall is coloured red to give the effect of a giant red carpet leading up to Buckingham Palace. This colour was obtained using synthetic iron oxide pigment from Deanshanger Oxide Works (Deanox), which was created using the Deanox Process devised by chemist Ernest Lovell. It was David Eccles' decision, as Minister of Works from 1951 to 1954, to make The Mall red.

On VE Day (8 May 1945), the Palace was the centre of British celebrations, with the King, Queen and Princess Elizabeth (the future queen) and Princess Margaret appearing on the balcony, with the Palace's blacked-out windows behind them, to the cheers from a vast crowd on The Mall.

During state visits, the monarch and the visiting head of state are escorted in a state carriage up The Mall and the street is decorated with Union Flags and the flags of the visiting head of state's country. During the Golden Jubilee celebrations of Queen Elizabeth II in 2002, over one million people packed The Mall to watch the public displays and the appearance of the Royal Family on the palace balcony. These scenes were repeated in 2011 for the wedding of Prince William and Catherine Middleton, and again in 2012 for the Queen's Diamond Jubilee, and the Jubilee concert.

Scheduled buses are not allowed to use the Mall and go past Buckingham Palace except by permission of the monarch. This has only happened twice in history; in 1927 and in 1950. 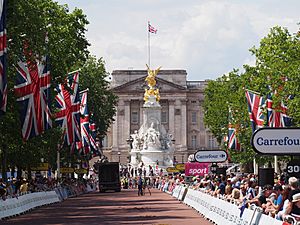 The annual London Marathon finishes on The Mall. It was also the start and finish line for the marathon course, the road race, and the race walks of the 2012 Olympic and Paralympic Games. The women's marathon took place on 5 August and the men's Olympic marathon on 12 August. The men's 20 km walk took place on 4 August, with the men's 50 km walk and women's 20 km walk took place on 11 August. The Paralympic marathons were held on 9 September. In recent years the Mall has also been repeatedly used as the finishing line for UK cycling events, including the 2012 Olympics Road Races, the Ride London Prudential Classic in 2013, and stage 3 of the 2014 Tour de France. The opening ceremony for the 2019 Cricket World Cup was held on The Mall.

All content from Kiddle encyclopedia articles (including the article images and facts) can be freely used under Attribution-ShareAlike license, unless stated otherwise. Cite this article:
The Mall, London Facts for Kids. Kiddle Encyclopedia.