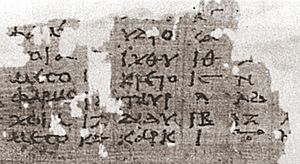 The acrophonic system was replaced by a new alphabetic system, sometimes called the Ionic numeral system, from the 4th century BC. Each unit (1, 2, …, 9) was assigned a separate letter, each tens (10, 20, …, 90) a separate letter, and each hundreds (100, 200, …, 900) a separate letter. This requires 27 letters, so the 24-letter Greek alphabet was extended by using three obsolete letters: fau ϝ, (also used are stigma ϛ or, in modern Greek, στ) for 6, qoppa ϟ for 90, and sampi ϡ for 900. To distinguish numerals from letters they are followed by the "keraia" (Greek κεραία—insect antenna), a symbol similar to an acute sign (Unicode U+0374).

This alphabetic system operates on the additive principle in which the numeric values of the letters are added together to form the total. For example, 241 is represented as σμαʹ (200 + 40 + 1).

To represent numbers from 1,000 to 999,999 the same letters are reused to serve as thousands, tens of thousands, and hundreds of thousands. A "left keraia" (Unicode U+0375, ‘Greek Lower Numeral Sign’) is put in front of thousands to distinguish them from the standard use. For example, 2008 is represented as ͵βηʹ (2000 + 8).

The Greeks also used the myriad to denote 10,000 (Μʹ) and the myriad myriad for one hundred million (ΜΜʹ).

All content from Kiddle encyclopedia articles (including the article images and facts) can be freely used under Attribution-ShareAlike license, unless stated otherwise. Cite this article:
Greek numerals Facts for Kids. Kiddle Encyclopedia.