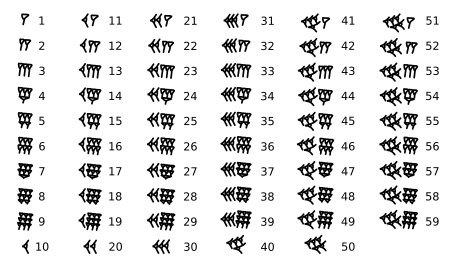 Babylonian cuneiform numerals were written in cuneiform, using a wedge-tipped reed stylus to make a mark on a soft clay tablet which would be exposed in the sun to harden to create a permanent record.

The Babylonians, who were famous for their astronomical observations, as well as their calculations (aided by their invention of the abacus), used a sexagesimal (base-60) positional numeral system inherited from either the Sumerian or the Eblaite civilizations. Neither of the predecessors was a positional system (having a convention for which 'end' of the numeral represented the units).

All content from Kiddle encyclopedia articles (including the article images and facts) can be freely used under Attribution-ShareAlike license, unless stated otherwise. Cite this article:
Babylonian numerals Facts for Kids. Kiddle Encyclopedia.