The binary numeral system is a way to write numbers using only two digits: 0 and 1. These are used in computers as a series of "off" and "on" switches. In binary, each digit's place value is twice as much as that of the next digit to the right (since each digit holds two values). In decimal - the system that humans normally use - each digit holds ten values, and the place value increases by a power of ten (ones, tens, hundreds, etc.). The place value of the rightmost digit in either case is 1.

Arithmetic is a way of adding together two or more binary numbers. There are four rules in binary arithmetic. They are:

This is because in binary there are only two digit; 0 and 1. Because of this, the number two and three have to be represented in some other way. This is how the binary value for three is calculated:

This shows that the binary value would be 11. 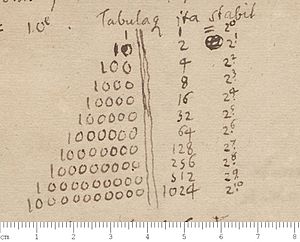 The binary numeral system, in a manuscript by Gottfried Wilhelm Leibniz, 1697 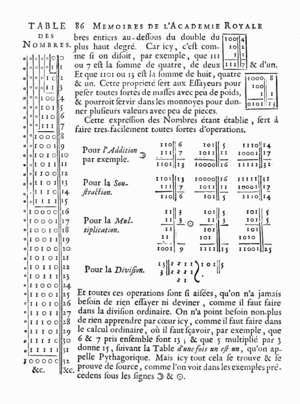 A page from „Explication de l’Arithmétique Binaire“, by Leibniz, 1703

Binary is a numbering system that is a series of 1s and 0s meaning (to the computers) on and off. It is base 2 and our number system (decimal) is base 10, where 10 numerals are used rather than 2.

Binary was invented by many people but the modern binary number system is credited to Gottfried Leibniz in 1679, a German mathematician. Binary has been used in nearly everything electronic; from calculators to supercomputers. Machine code is binary digits.

All content from Kiddle encyclopedia articles (including the article images and facts) can be freely used under Attribution-ShareAlike license, unless stated otherwise. Cite this article:
Binary number Facts for Kids. Kiddle Encyclopedia.