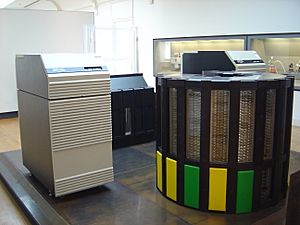 A supercomputer is a computer with great speed and memory. This kind of computer can do jobs faster than any other computer of its generation. They are usually thousands of times faster than ordinary personal computers made at that time. Supercomputers can do arithmetic jobs very fast, so they are used for weather forecasting, code-breaking, genetic analysis and other jobs that need many calculations. When new computers of all classes become more powerful, new ordinary computers are made with powers that only supercomputers had in the past, while new supercomputers continue to outclass them.

Electrical engineers make supercomputers that link many thousands of microprocessors.

Array type computer ILIAC started at 1972 and since that, CF-11, CM-2, Mas Par MP-2(that has array type) is developed. Lately, array type supercomputer is beginning to make a mark. And movements that use physically separated memory like one shared memory bring T3D, KSR1, and Tera Computer.

All content from Kiddle encyclopedia articles (including the article images and facts) can be freely used under Attribution-ShareAlike license, unless stated otherwise. Cite this article:
Supercomputer Facts for Kids. Kiddle Encyclopedia.