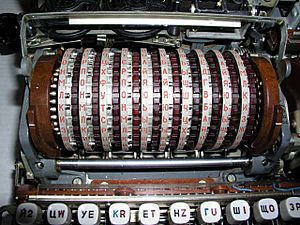 Close-up of the rotors in a Fialka cipher machine

Cryptanalysis (from the Greek kryptós, "hidden", and analýein, "to loosen" or "to untie") is the study of methods for obtaining the meaning of encrypted information, without access to the secret information which is normally required to do so.

This involves finding a secret key. In non-technical language, this is the practice of codebreaking or cracking the code, although "break" can also mean just a part of a complete solution.

People have been making and breaking codes for many centuries. In the 1930s specialized machines were invented to do the calculations.

Code-breaking machines such as the Colossus computer were important during World War II. For example in the Battle of Midway the Americans broke the Japanese code and were able to know where the Japanese fleet were heading and what they were bringing.

Computers were the main tool of cryptanalysis in the Cold War and later.

All content from Kiddle encyclopedia articles (including the article images and facts) can be freely used under Attribution-ShareAlike license, unless stated otherwise. Cite this article:
Cryptanalysis Facts for Kids. Kiddle Encyclopedia.