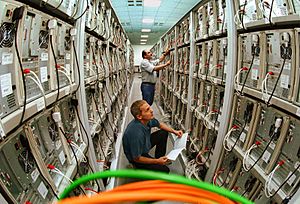 Technicians working on a large Linux cluster at the Chemnitz University of Technology, Germany 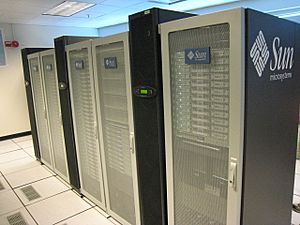 A computer cluster consists of a set of loosely or tightly connected computers that work together so that, in many respects, they can be viewed as a single system. Unlike grid computers, computer clusters have each node set to perform the same task, controlled and scheduled by software.

Grid computing is different in that the individual computers work on separate tasks that are part of a large problem. They are usually more different from one another and geographically further apart than cluster computers are.

The first production system designed as a cluster was the Burroughs B5700 in the mid-1960s. This allowed up to four computers, each with either one or two processors, to be tightly coupled to a common disk storage subsystem in order to distribute the workload. Unlike standard multiprocessor systems, each computer could be restarted without disrupting overall operation.

Computer clusters emerged as a result of convergence of a number of computing trends including the availability of low-cost microprocessors, high-speed networks, and software for high-performance distributed computing. They have a wide range of applicability and deployment, ranging from small business clusters with a handful of nodes to some of the fastest supercomputers in the world such as IBM's Sequoia.

The desire to get more computing power and better reliability by orchestrating a number of low-cost commercial off-the-shelf computers has given rise to a variety of architectures and configurations.

Computer clusters may be configured for different purposes ranging from general purpose business needs such as web-service support, to computation-intensive scientific calculations.

All content from Kiddle encyclopedia articles (including the article images and facts) can be freely used under Attribution-ShareAlike license, unless stated otherwise. Cite this article:
Cluster (computing) Facts for Kids. Kiddle Encyclopedia.