There are lots of different versions of the Raspberry Pi, and each has different features.

All versions use an SD card or MicroSD card for the operating system and file storage. They also have a 40-pin General-Purpose Input/Output (GPIO) connector, which can be used for controlling other electronics. 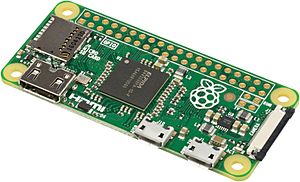 The Raspberry Pi Zero, a US$7 model first introduced in 2015 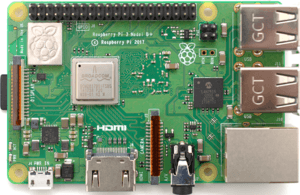 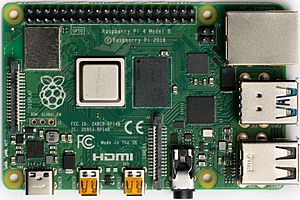 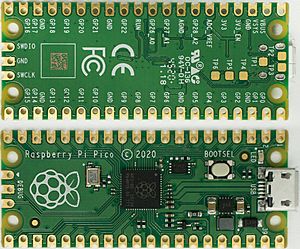 The Raspberry Pi Pico, introduced in 2021

The first generation (Raspberry Pi Model B) was released in February 2012, followed by the simpler and cheaper Model A. In 2014, the Foundation released a board with an improved design, Raspberry Pi Model B+. These first generation boards feature ARM11 processors, are approximately credit-card sized and represent the standard mainline form-factor. Improved A+ and B+ models were released a year later. A "Compute Module" was released in April 2014 for embedded applications.

Raspberry Pi 4 Model B was released in June 2019 with a 1.5 GHz 64-bit quad core ARM Cortex-A72 processor, on-board 802.11ac Wi-Fi, Bluetooth 5, full gigabit Ethernet (throughput not limited), two USB 2.0 ports, two USB 3.0 ports, and dual-monitor support via a pair of micro HDMI (HDMI Type D) ports for up to 4K resolution. The Pi 4 is also powered via a USB-C port, enabling additional power to be provided to downstream peripherals, when used with an appropriate PSU. The initial Raspberry Pi 4 board has a design flaw where third-party e-marked USB cables, such as those used on Apple MacBooks, incorrectly identify it and refuse to provide power. Tom's Hardware tested 14 different cables and found that 11 of them turned on and powered the Pi without issue. The design flaw was fixed in revision 1.2 of the board, released in late 2019. 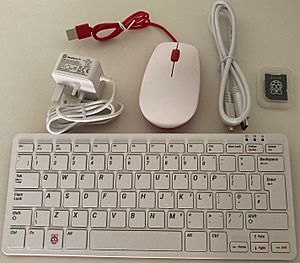 Raspberry Pi 400 was released in November 2020. It features a custom board that is derived from the existing Raspberry Pi 4, specifically remodelled with a keyboard attached. A robust cooling solution similar to the one found in a Commodore 64 allows the Raspberry Pi 400's Broadcom BCM2711C0 processor to be clocked at 1.8 GHz, which is slightly higher than the Raspberry Pi 4 it's based on. The keyboard-computer features 4 GB of LPDDR4 RAM.

Raspberry Pi Pico was released in January 2021 with a retail price of $4. It was Raspberry Pi's first board based upon a single microcontroller chip; the RP2040, which was designed by Raspberry Pi in the UK. The Pico has 264 KB of RAM and 2 MB of flash memory. It is programmable in MicroPython, CircuitPython, and C. It has partnered with Adafruit, Pimoroni, Arduino and SparkFun to build Accessories for Raspberry Pi Pico and variety of other boards using RP2040 Silicon Platform. Rather than perform the role of general purpose computer (like the others in the range) it is designed for physical computing, similar in concept to an Arduino.

All content from Kiddle encyclopedia articles (including the article images and facts) can be freely used under Attribution-ShareAlike license, unless stated otherwise. Cite this article:
Raspberry Pi Facts for Kids. Kiddle Encyclopedia.