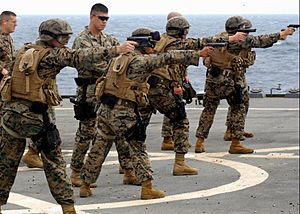 Battledress is a general term for the military uniform worn into combat, as opposed to 'display' dress and formal uniforms worn at parades and functions. It may be either monochrome (often a shade of green or brown) or in military camouflage colours.

All content from Kiddle encyclopedia articles (including the article images and facts) can be freely used under Attribution-ShareAlike license, unless stated otherwise. Cite this article:
Battledress Facts for Kids. Kiddle Encyclopedia.