For the car called after the corvettes, see Chevrolet Corvette 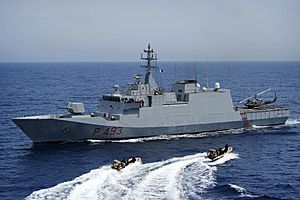 A corvette is a small, manageable and lightly armed war ship. During the Age of the Sail, corvettes were smaller than frigates and larger than sloops-of-war, they had normally a single gun deck. Almost all the modern navies use ships smaller than frigates for coastal duty, but not all of them use the term corvette (from the French corvair) or equivalent.

During the Age of Sail, corvettes were one of many types of smaller warships. The role of the corvette consisted mostly of coastal patrol, fighting minor wars, supporting large fleets, or participating in show-the-flag missions. The English Navy began using small ships in the 1650s, but described them as sloops rather than corvettes. The first reference to a corvette was with the French Navy in the 1670s, which may be where the term originated.

Most corvettes and sloops of the 17th century were around 40 to 60 ft (12 to 18 m) in length and measured 40 to 70 tons burthen. They carried four to eight smaller guns on a single deck. Over time, vessels of increasing size and capability were called corvettes; by 1800, they reached lengths of over 100 ft (30 m) and measured from 400 to 600 tons burthen. 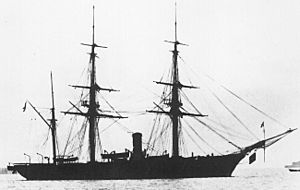 Ships during the steam era became much faster and more manoeuvrable than their sail ancestors. Corvettes during this era were typically used alongside gunboats during colonial missions. Battleships and other large vessels were unnecessary when fighting the indigenous people of the Far East and Africa.

The modern corvette appeared during World War II as an easily built patrol and convoy escort vessel. The British naval designer William Reed drew up a small ship, whose simple design and mercantile construction standards lent itself to rapid production in large numbers.

All content from Kiddle encyclopedia articles (including the article images and facts) can be freely used under Attribution-ShareAlike license, unless stated otherwise. Cite this article:
Corvette Facts for Kids. Kiddle Encyclopedia.