Anglo-Cornish (also known as Cornish English, Cornu-English, or Cornish dialect) is a dialect of English spoken in Cornwall by Cornish people. Dialectal English spoken in Cornwall is to some extent influenced by Cornish grammar, and often includes words derived from the Cornish language. The Cornish language is a Celtic language of the Brythonic branch, as are the Welsh and Breton languages. In addition to the distinctive words and grammar, there are a variety of accents found within Cornwall from the north coast to that of the south coast and from east to west Cornwall. 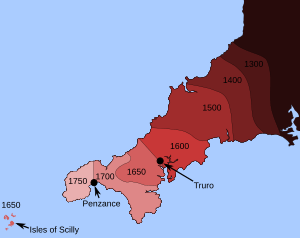 Transition from Cornish towards English within Cornwall

The first speakers of English resident in Cornwall were Anglo-Saxon settlers, primarily in the north east of Cornwall between the Ottery and Tamar rivers, and in the lower Tamar valley, from around the 10th century onwards. There are a number of relatively early place names of English origin, especially in those areas.

The further spread of the English language in Cornwall was slowed by the change to Norman French as the main language of administration after the Norman Conquest. In addition, continued communication with Brittany, where a closely related Celtic language was spoken, tended to favour the continued use of the Cornish language.

But from around the 13th to 14th centuries the use of English for administration was revived, and a vernacular Middle English literary tradition developed. These were probable reasons for the increased use of the English language in Cornwall. In the Tudor period, various circumstances, including the imposition of an English language prayer book in 1549, and the lack of a Cornish translation of any part of the Bible, led to a language shift from Cornish to English.

South Australian Aborigines, particularly the Nunga, are said to speak English with a Cornish accent because they were taught the English language by Cornish miners. Most large towns in South Australia had newspapers at least partially in Cornish dialect: for instance, the Northern Star published in Kapunda in the 1860s carried material in dialect. At least 23 Cornish words have made their way into Australian English; these include the mining terms fossick and nugget.

As fewer people spoke the Cornish dialect, other people, such as people in the Old Cornwall Society, wrote down the dialect, and made audio recordings, so the dialect wouldn't be lost.

All content from Kiddle encyclopedia articles (including the article images and facts) can be freely used under Attribution-ShareAlike license, unless stated otherwise. Cite this article:
Cornish dialect Facts for Kids. Kiddle Encyclopedia.