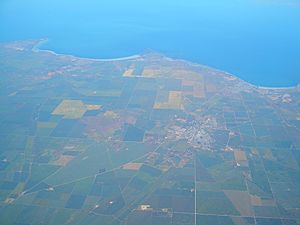 Aerial view of the Copper Triangle, looking roughly west, toward Spencer Gulf. Kadina is in the center (inland), Wallaroo and Moonta on the coast (right and left, respectively)

*This article is about a region in Australia. For coast of County Waterford, Ireland, see Copper Coast (Ireland).

Copper Coast is a region of South Australia situated in Northern Yorke Peninsula and comprising the towns of Wallaroo, Kadina, Moonta, Paskeville and Port Hughes. The area approximately bounded by Wallaroo, Kadina and Moonta is also known as the Copper Triangle. The area is so named because copper was mined from there in the late 19th and early 20th centuries, a significant source of economic prosperity for South Australia at the time. These three towns are known for their large Cornish ethnicity, often called "Little Cornwall". Kernewek Lowender is the world's largest Cornish Festival, held biennially in the Cornish Triangle. The area continues to make a significant contribution to the economy of South Australia, as a major producer of grain, particularly barley and wheat.

The area became established as a source of copper in 1861, when Paddy Ryan found copper traces coming out of a wombat's burrow which was on a pastoral lease granted to Walter Watson Hughes. Hughes formed the Tipara Mining Company, which later became the Moonta Mining Company. By the late 1800s, Moonta had the largest urban population outside of Adelaide, with 12,000 people, including many Cornish miners and their families who brought with them their skills, and lifestyle. Much of the character of this period was captured by local cartoonist Oswald Pryor (1881–1971), son of a Cornish miner. Later, agriculture became more important to the region's economy from the 1880s onward. The region has been able to sustain its agricultural productivity as it is below the Goyder Line.

The Copper Coast's urban centres of Kadina, Wallaroo and Moonta form the core of Yorke Peninsula's retail sector. In recent years, the population of the region has grown significantly. Several new housing developments have taken place, including Patrick's Cove at Port Hughes, Copper Cove Marina at Wallaroo, and the Dunes at Port Hughes, which includes the first golf course designed by Greg Norman to be constructed in Australia. Wallaroo Shores Estate on the foreshore of Wallaroo is currently underway, and predicted to be the largest beachfront residential development in South Australia.

The coastal towns of the Copper Coast are popular destinations for tourists, particularly from Adelaide, as well as from regional areas of South Australia. The remains of the historic mines can be inspected, including the ruins of the old copper smelter at Wallaroo and the old Moonta mines. Fishing is a popular recreational activity. There are several local jetties. Also, there are boat ramps available to launch a boat to fish in the local waters. The biennial Kernewek Lowender is a major tourist attraction in May of each odd numbered year. Besides tourism, the major local industry is grain production, particularly barley and wheat, with a major grain export facility at Wallaroo.

The local government is the Copper Coast Council, which was formed in May 1997 as a result of the amalgamation of the District Council of Northern Yorke Peninsula and the Corporation of the Town of Wallaroo. The council seat is in Kadina, and there are council branch offices in Moonta and Wallaroo. 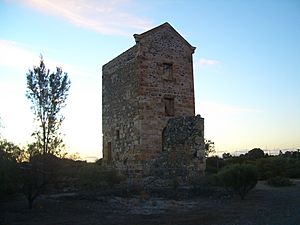 At the Wallaroo Mines site

Remains of the Cornish mining heritage continue to be evident, including stone cottages constructed by the miners, and the remains of mine sites, including Hughes' Engine House and Richman's Engine House. Information on local Heritage walks and drives can be obtained from the Copper Coast Visitor Information Centre in Kadina, the Moonta Tourist Outlet or the Wallaroo Information Outlet. Several museums have been established in the area to preserve the local heritage, including: 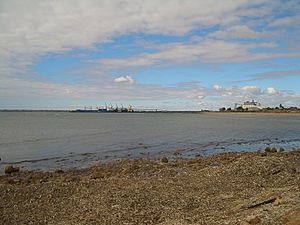 The port of Wallaroo, with its grain terminal

All content from Kiddle encyclopedia articles (including the article images and facts) can be freely used under Attribution-ShareAlike license, unless stated otherwise. Cite this article:
Copper Coast Facts for Kids. Kiddle Encyclopedia.