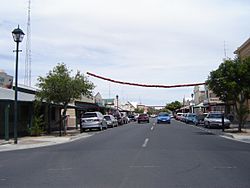 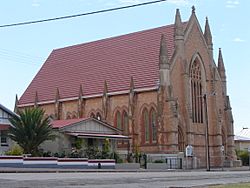 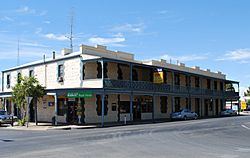 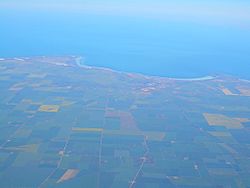 Moonta is a town on the Yorke Peninsula of South Australia, 165 km (103 mi) north-northwest of the state capital of Adelaide. It is one of three towns known as the Copper Coast or "Little Cornwall" for their shared copper mining history.

The centre is about 17 kilometres (11 mi) south west of Kadina, site of Wallaroo Mines, and 14 kilometres (8.7 mi) south of the port of Wallaroo. The name "Moonta" is reportedly derived from munta-muntara or moontera, an Aboriginal word for "thick scrub place" or "impenetrable scrub".

At the 2011 census, the Moonta township and the adjacent suburbs of Cross Roads and Yelta had a combined population of 681. The broader Moonta urban centre, also including Moonta Bay, North Moonta and Port Hughes, had a population of 3,659.

Prior to European settlement, the Moonta area was occupied by the indigenous Narungga people.

The Yorke Peninsula coastline near Wallaroo was separately navigated by Matthew Flinders and Nicolas Baudin in 1802.

The first Europeans to explore the district were John Hill and Thomas Burr.

Large and rich deposits of copper were discovered at Moonta in 1861 by Patrick Ryan, a shepherd from Walter Hughes' property. This became a prosperous mine, named Wheal Hughes, with other mines soon to follow. The government town of Moonta was surveyed in March 1863, while an informal township of mining workers also grew at Moonta Mines. A horse tramway from Moonta to the port at Wallaroo opened in July 1866. Following advertising by the South Australian Government, Cornish miners arrived in Moonta in large numbers. The mines at Moonta proved to be the richest mines in the whole of South Australia by 1917, exceeding the total wealth created by all other mines since 1836, the year of establishment of South Australia. The population of Moonta in 1875 was 12,000. The main copper mining operations at Moonta Mines ceased in 1923, although a number of smaller mines continued to be worked for some years. Smaller-scale operations recommenced in the area in the late 1980s but had closed by the mid-1990s.

Moonta has a number of heritage-listed sites listed on the South Australian Heritage Register, including:

Following the demise of copper mining, the district successfully merged into dry land farming. Moonta's surrounds are used for growing barley, wheat and other crops such as legumes, canola, chickpeas and field peas. Barley from the region is considered to be some of the best in the world.

Starting in the 1880s, agitation for conversion of the horse tramway to a steam locomotive railway commenced.

All content from Kiddle encyclopedia articles (including the article images and facts) can be freely used under Attribution-ShareAlike license, unless stated otherwise. Cite this article:
Moonta, South Australia Facts for Kids. Kiddle Encyclopedia.