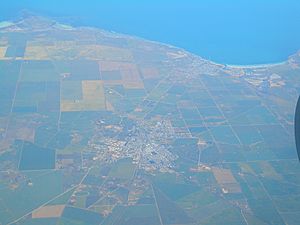 Aerial view of Kadina (in the center, inland) and Wallaroo (on the coast). Looking west toward Spencer Gulf 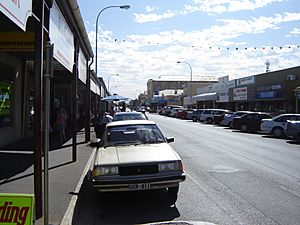 Kadina is a town located on the Yorke Peninsula of South Australia, approximately 144 kilometres north-northwest of the state capital of Adelaide. The largest town of the Peninsula, Kadina is one of the three Copper Triangle towns famous for their shared copper mining history. The three towns are known as "Little Cornwall" for the significant number of immigrants from Cornwall that worked at the mines in the late 19th century.

It is about 20 kilometres (12 mi) north-east of Moonta and 8 kilometres (5.0 mi) east of the port town of Wallaroo. There are 6 suburbs making up Kadina's township, each being a distinct historic locality or hamlet. These are: Jericho, Jerusalem, Matta Flat, New Town and Wallaroo Mines as well as central Kadina itself. Kadina East was previously a gazetted suburb east of Kadina's centre, later merged into Kadina itself.

The name "Kadina" is thought to be derived from Kadiyinya, an (indigenous) Narungga tribe word meaning 'Lizard Plain'.

The town is the base for local radio station Gulf FM, broadcasting at 89.3 FM.

Copper was discovered at Wallaroo Mines in 1859 and adjacent land north east of the site was surveyed in 1861 to house miners. The township was named Kadina. Exceptional amounts of copper were found in the following years. Copper was also found in large amounts at the nearby Matta Mine and Doora Mine. The copper mines attracted many highly experienced Cornish miners to Kadina. In 1872 Kadina became a municipality and by 1875 the population had increased to 20,000, mostly composed of Cornish miners.

In 1862 a horse-drawn railway was opened from Kadina to the port at Wallaroo west of the town. Further lines connecting Kadina to Port Wakefield to the southeast and Bute to the northeast opened in 1878 and 1879 respectively. These rail lines fell into disuse and were closed in 1989. Mining ceased completely in 1938.

The town today consists of important historical colonial and federation buildings gathered around Victoria Square. Kadina and its surrounds are experiencing some minor growth due to the Copper Cove housing development at Wallaroo.

Kadina also contains the Farm Shed Museum & Tourism Centre (Kadina Heritage Museum) and remnants of the Wallaroo Mines. Kernewek Lowender, a Cornish festival, is held every odd year in May in Kadina (as well as Moonta and Wallaroo where each location hosts the festival for one day)

Kadina has a number of heritage-listed sites, including:

Kadina exists in a semi-arid location, above Goyder's Line, and is surrounded by mallee scrub. It is located 8 kilometres inland and 44 metres above sea level. Kadina has a dry Mediterranean climate with seasonal temperatures a few degrees above Adelaide's temperatures. The average winter temperature is 15.4 °C and the average summer temperature is 30.5 °C. Average rainfall of Kadina is 388.8 millimetres. The weather patterns are similar to those of Adelaide.

Kadina's surrounds are used for growing barley, wheat and other crops such as legumes, canola, chickpeas and field peas. Barley and wheat from the region is considered to be some of the best in the world.

All content from Kiddle encyclopedia articles (including the article images and facts) can be freely used under Attribution-ShareAlike license, unless stated otherwise. Cite this article:
Kadina, South Australia Facts for Kids. Kiddle Encyclopedia.